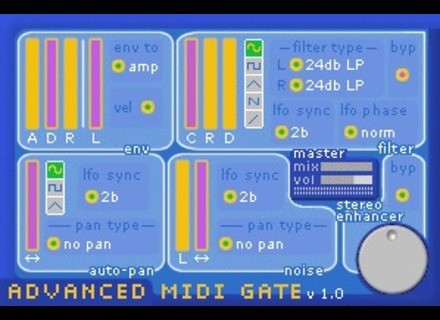 Oli Larkin Advanced Midi Gate
4
The Oli Larkin Advanced Midi Gate is a free plug-in for use in your sequencer. It can be used for a variety of purposes, but will be used most for triggering MIDI gates. The plug-in is downloadable right from the Oli Larkin site, along with a number of other free plug-ins. Unfortunately, the plug-in is only available as a VST plug-in for Windows operating systems. For this reason, I’m not running it on my current system and haven’t used it in a few years since I had my DAW running on a PC. The interface of the plug-in itself definitely gives you the full array of controls, including envelope parameters, filter controls, and much more for a little MIDI gate. It also has a stereo enhancer toggle knob and LFO sync and panning. I don’t think users will need a manual, nor am I sure if one is even available for this.

I used to run the Oli Larkin Advanced Midi Gate on my old Hewlett Packard laptop. I never had any problems at all running the plug-in as it doesn’t take up much of your processing power at all. The HP computer I was running it on had a 3.0 Ghz processor and 2 GB of RAM, while I was using it mostly in Cubase SX. I’d highly doubt if anyone had a problem running this plug-in…

I’ll never say no to a free plug-in, so I was happy to be able to download the Advanced Midi Gate and the other Oli Larkin for free when I was able to run them. I do wish they were compatible on Mac as I’d still be running them, but did get some good use from this when I had it. I didn’t work with MIDI all that often when I did have it, so I’m sure there was a lot I could do with it that I didn’t, but was definitely cool to have around anyway. I like this plug-in because it’s unique and isn’t one you’re going to fine for free in too many other places. In fact, that’s the case with most of the Oli Larkin plug-ins. If you’re still reading this review, I’d suggest heading over to the Oli Larkin site to try this one for yourself.