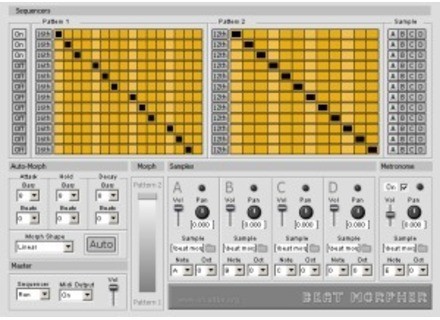 Oli Larkin Beat Morpher
5
Oli Larkin's Beat Morpher software is a unique and FREE VST and Windows only plug-in that allows you to 'morph' together two separate drum patterns. It works by playing back samples to go with however you set it, but it's unique in that it's actually two drum machines in one and that you can merge the two of them together. It's a really cool plug-in even setting aside the fact that it's free. The downside is that most users won't have access to it due to compatibility issues being that it's so limited in it's compatibility scope. The interface is fairly in depth and has a lot of controls and features to get used to. Setting your two independent drum patterns is easy enough but it's the morphing features that will take a bit of time to get used to, or at least it took a little bit of time for me. There probably isn't a manual so you're on your own here, but the good news is that it's still free!

I used to have the Oli Larkin Beat Morpher plug-in running on my home recording system but no longer have it since I've since switched systems. I used to have Cubase SX running on a Hewlett Packard Pavilion dv8000 Notebook that I was running this on, but now have Pro Tools on a Mac and can't run it any longer. I would be nice to have a bit more compatibility options, but being that it's free we can't complain too much. It should run fine on any system that is able to run it, however.

If you've got a PC and can run VST plug-ins, do yourself a favor and give the Oli Larkin Beat Morpher a shot. It's not for everyone, but it can do some really cool things and is definitely worth a try for anyone who likes working with making their own drum patterns and getting sounds inside the box. You can make some pretty insane drum patterns between the two at once and it works with samples so you can still have all your sounds right in it. I haven't used it in a few years now since my system is no longer compatible, but I would definitely still be using it if I did. Hopefully they'll make it compatible on more systems, but I really don't think they will any time soon as it seems to be just the one guy making these free plugs. There's no reason not to try this one out if you're able to!
Did you find this review helpful?yesno
»