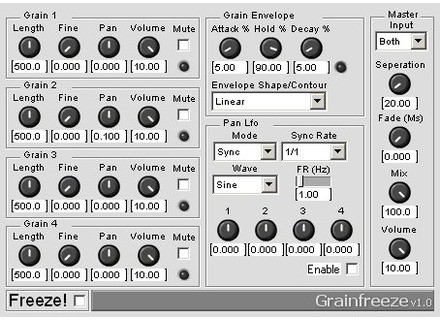 Oli Larkin Grain Freeze
4
Oli Larkin's Grain Freeze is a granular synthesis effects plug-in that is just compatible on Windows based systems that have a DAW that can support VST plug-ins. Unfortunately that's the scope of this plug-in and the other free ones that Oli Larkin has to offer, but it's definitely a cool one for those have will have access to it. You can get the plug-in as a free download straight from the Oli Larkin website, which is a process that should take less than a minute. Once it's up and installed, cracking the code of the interface will take a little longer depending on your experience with granular synthesizers. This one has four grain sections, each with parameters for length, fine, pan, volume, and a mute option. The plug also has sections for grain envelope, a panning LFO, and a master control section. Once you get the hang of using the grain sections I think you'll find it to be pretty easy to use in general if you know the basics when it comes to synthesizers. I don't believe a manual was made for this if you were looking for one...

While I no longer have a system that will support the Oli Larkin Grain Freeze plug-in, when I did I was running it in Cubase SX 2.0 and later in 3. The computer that I was running everything on was a Hewlett Packard Pavilion dv8000 Notebook that had a 3.0 Ghz processor and 2 GB of RAM. I also had a MOTU 896HD audio interface to run everything through. I can't recall ever having a problem with this plug-in, but I never used more than one instance of it at a time within a session...

The Oli Larkin Grain Freeze is a really cool little free plug-in. It's worth having for everyone who is able to run it, although this will be a limited amount of DAW users since this excludes Mac users and anyone that has a PC who can't run VST plug-ins. Of course you can't complain too much because it's free! It's a really cool sounding effect when used on synthesized sounds or otherwise, and it's versatile between the four grain freezers. It's definitely a unique effect as it's the kind of make up you won't find in too many places, but for me it makes it all the more valuable and impressive that it's free. Check it out for yourself to see what it's all about!
Did you find this review helpful?yesno
»