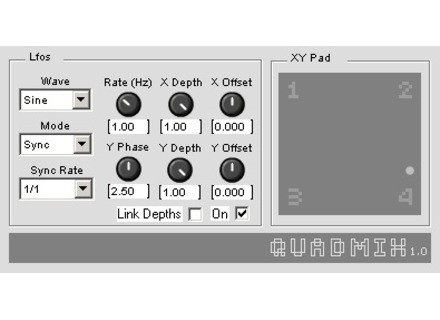 Oli Larkin Quadmix
4
Oli Larkin's Quadmix is a free plug-in that's actually two in one, also featuring a Quadpan plug-in. The plug-in is for use for synthesizer applications, but essentially it sends four separate inputs to one output, and Quadpan does the opposite of this by sending one input to four outputs. The plug-in is available as a free download on Oli Larkin's website, along with a variety of other free ones. However, you can only get it for VST based Windows systems. The interface has an LFO with parameters for waveform, mode, and sync rate, while there are also knobs for rate (frequency), phase, and X & Y depth and offset as well. It's been a long time since I used the plug-in so I don't remember all the ins and outs of it, but it should more or less be pretty simple depending on what you're using it for. It's a utility plug-in more than anything, and I doubt if there's a manual for it.

I'm not running the Oli Larkin Quadmix plug-in any longer at home since I don't have a system that will run it anymore. My old computer was a Hewlett Packard Pavilion dv8000 Notebook with a 3.0 Ghz processor and 2 GB of RAM, which I used to run Cubase SX 2.0 and later 3. I didn't have any issues running this plug-in on this system and would be surprised if users did have issues with it.

While I never used the Oli Larkin Quadmix plug-in too much when I had it, it's still one worth having around if you're dealing with synth related activities. It's not going to be needed on anything close to a daily basis (of course depending on what you're trying to do), but it came in handy a few times for me. It's nice that it's free of course and does give you a good amount of control considering this. Not everyone will have a compatible system, but for those who can get it, it's worth having Quadmix and Quadpan if you're dealing with routing virtual synthesizers at all.
Did you find this review helpful?yesno
»