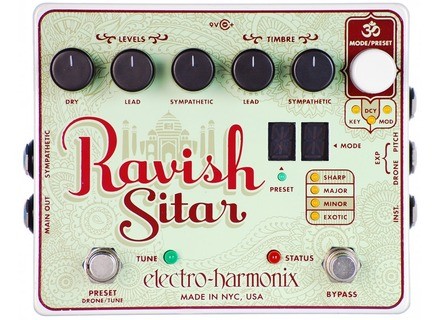 Electro-Harmonix Ravish Sitar
3
I used it with a fender deluxe hotrode for the experimental rock groove. It feeds by a traditional or a 9v 9v square battery.
It is a solid, well-designed pedal, no worries from that point of view.
Setting aside, it's pretty versatile in style sitar (but that's what we ask right?) Later, it does not replace all a real sitar and build an entire top directory ... well why not but you really have to work so thoroughly!
The knobs are quite effective and well thought out.
I bought in addition to a project, but in the end, I never managed to integrate into my pedal set. She contrasted too much and suddenly it broke a little feeling grooves when I came home.
But I think it's a must try if you can afford it because it also open doors in research for new sounds.

11 of 14 people found this review helpful

Taquet2012's review (This content has been automatically translated from French)" A pedal that opens the chakras!"

Electro-Harmonix Ravish Sitar
5
I let you see all the features on the net ...
In all this it looks solid but I have since 2 weeks so we'll see ...
Against by attention, it takes a little space on the pedalboard.

The grip is easy for some one read the manual (very well explained by the way). It is mandatory to fully exploit the potential of the beast. Then the sound editing is relatively simple and each parameter change affects significantly the rendering. Anyway we quickly get to what one has in mind.
In 5 minutes I had to edit a preset "Wherever I May Roam" and another for "for the love of god"

Speak of her: the rendering is very very good. I do not know if you can compare the rendering with the original instrument (purists probably spit on it) but honestly, close your eyes and play ... we believe it! the harmonies are rich, presets (editable) can go from a very "sitaristiquement" realistic sounds much more experimental.
The benefit of this pedal is open to other ranges out of his penta ... brief experiment! And with a sound like this is a real treat!
Note that we can also use it in game and not in accord solo

This pedal is a very nice, not necessary of course, but that opens a lot of possibilities and creative sound. It is not given but it is sure to sound quality is justified in my opinion.
When the clicks you spends some time on it and it's usually a sign that does not deceive ...
most: SOUNDS!
least: a little time to take his bearings and tame

benten808's review (This content has been automatically translated from French)" stimulating pedal."

Electro-Harmonix Ravish Sitar
4
Complex effect combining intelligent pitch shifting, modulation and analysis / control of the envelope to make an emulation of sitar and other sounds typed.
The pedal emulates the tone of the strings of a sitar and reproduces the resonant sympathetic strings of the original instrument. Importantly, we just define the reference range of "sympathetic strings" and more, set individual tuning of each.
The whole is crowned with level controls for sound dry, the sound of "lead rope" and emulated the sound of "sympathetic strings". Two settings define the stamp made of metal strings emulated.
I think it should be a combined digital-analog.
Presets are supplied and programmed sounds can be saved.
Not possible with a computer interface.

The use is a little unusual and the reduced number of controls on the front makes using a bit confusing at first.
The manual is provided in English, however well designed and concise. The first use of a preset is in a page.
In good synth enthusiast, I like to handle this kind of machines. But I think the principle of publishing the pedal can put off those of us who like things "straight forward".

I'm not sure how realistic emulation. But the record is undeniably exotic and beautiful.
The effect made by the emulation of sympathetic strings is very troubling. It is difficult to discern these vibrations very distinct, but a note placed outside the reference range you selected will be distinguished by a frank disharmony in your entire party. Very special to grasp.
I used it effectively with the micro acute and a Les Paul with a simple hohner G3T.
I love the effect rendering.

I have since yesterday. This effect is unique, I have heard anything like it so far. EHX has not made fun of its clientele, this is for people who want something new in sound design for guitar and there you have something really new and music at hand. Few controls for a complex effect, the implementation can put off for good reason.
I am delighted with the result.

Published on 08/31/11
Electro-Harmonix introduces the Ravish Sitar pedal, which transforms a guitar into a sitar.