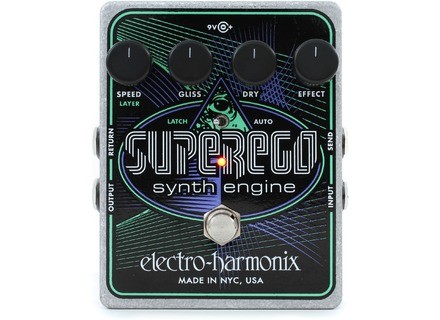 Superego, Other Guitar Effect from Electro-Harmonix.

View all offers for Electro-Harmonix Superego »

Electro-Harmonix Superego
see https://www.ehx.com/products/superego/instructions to learn a little more or https://fr.audiofanzine.com/delay-guitare/electro-harmonix/superego/news/a.play, n.18581.html, I'm lazy ...
roughly one plays a note is pressed, the note extends indefinitely. After three possible uses via the central switch:
LATCH: you play, you press a sudden, (or) note "takes" and moved. We play another note, is pressed, the note adds - and so on. Obviously one can stay on a single note playing and if we want to add QLQ thing is pressed and hop. We are tired of these layers created, you hit the button twice on the pedal and it stops - in fade out fast enough. Or placing the switch in central and back left LATCH (to be seated). More flexible as fade out.
MOMENTARY: you can play, press the button and ON GUARD SUPPORTED: sound moves. We play another note or chord, the button is released and the rappuie: this is the new note or new agreement takes place. Note that you can set the time of the passage between the two layers, which can give a very odd effect (or even interesting) glissando (portamento?).
When in AUTO mode, which I never use, I think it allows you to launch an agreement is pressed, the agreement remains one cheek, then another agreement is pressed, the new agreement takes the place (we does not need to keep the foot on the button) (but I'm not sure, sorry).
Another very interesting thing: you can insert effects on the water created: echo, vibrato, tremolo ... It provides a living web. There's a EFFECT IN EFFECT OUT and.
go, one last thing: you can adjust the sound (ie the direct sound when the pedal is operating) (red LED) and the sound of the water.

It is groping one becomes uh ... This is a pedal that can be learned, that grows to the extent where there are tricks by using - you know, I was looking for a pedal that maintains a sound, but in the end I'm much more than that. It can create a really interesting atmosphere. OK, I was a little put off at first. Now she never leaves my electric set.

I was asked if I was put in my synth ... according to the effects which are placed in the water, you can really get some interesting sounds. Well, to know the whole dose, too strong or too many notes and it can get boring.
I use it mostly with a Telecaster (Dupont) (frankly, why look elsewhere, hers is an unbeatable value for money, but that is another story), Princeton amp 70s.
Ah yes, a IMPORTANT thing: the sound coming out of the pedal is made up of your game and the web that you created. If you include downstream effects between the pedals and your amp, the web will also be impacted by these effects. So better put this pedal last if you do not want the distortion (for example) acts on the web.
I am clear now?

I use it for more than a year, I do not know of any other pedal that offers the same effect. EHX has a monopoly (to my knowledge), so no comparison at the technical level - and at the price. A little expensive, necessarily (minus one point) but very very interesting.
It requires some learning, but it's worth it to look (in every sense) above.
The button has been slightly improved compared to the coarse stuff there qlqs years. It is quieter - but still a bit. It makes him still lose a point. At this price, anyway ...
on http://www.julesthevenot.net/pages/Extraits_musicaux-5273130.html you can hear something (the first file) that I made using this pedal. Small sheet like that in passing.

Published on 05/09/12
Electro-Harmonix's Superego has been released.

See all 171 photos of Electro-Harmonix Superego »

View all 6 videos of Electro-Harmonix Superego »

Electro-Harmonix Superego manuals and other files