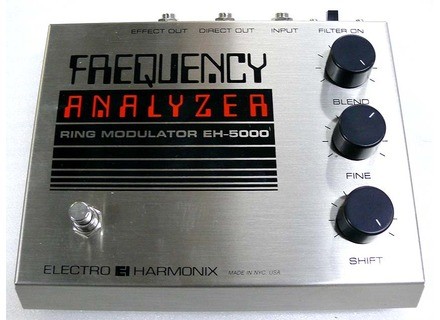 Electro-Harmonix Frequency Analyzer Mk2
5
I acquired this item new from eBay. I paid $150, which included the unit, its power supply, free shipping, and three sets of Electro-Harmonix guitar strings. I bought this item because I needed a reasonably-priced yet high quality ring modulator for a variety of applications.

In terms of classic ring modulator sounds, I defy any unit to beat this one, regardless of price. Though simpler (that is to say, less feature-packed) than many out there, its tone will compete with any comers. For all its simplicity, this unit DOES have one feature that most others do not, one which is often overlooked: a fine tuning knob with which the user can make subtle pitch/microtonal changes over a one octave range.

All things being equal, I love this unit unconditionally. As I mentioned above, this unit DOES lack many of the features that its higher-priced counterparts have.

The construction of this unit seems solid, though it is bigger than most. This does not bother me, but it might those with limited pedal board space. It should be noted that it is no bigger than any other ring modulator available, except for the DOD Gonkulator, a rare, overpriced, less flexible unit noteworthy chiefly because Incubus's guitarist uses one.

Even if I had the money to buy the Moogerfooger, the Frostwave, or (I wish) the Lovetone ring modulator, I'm not sure that I would. I'll state it again: in terms of sound, this one takes on all comers. All things considered, the Electro-Harmonix Frequency Analyzer is, without question, the best value for one's money. The only thing better is two of them.

It's emphatically NOT for everyone! I had some cash burning a hole in my pocket, and had a scoot 'round the EHX website, where mention was made of DEVO, and Mudhoney's Mark Arm has submited an 'End of Western Civilisation' soundclip, all feedback and psychosis. I was too scared to ask to try it out in a shop full of earnest musos, so took it home, waited until my wife was out and... Sweet merciful God! Used 'sensibly' you can add a pleasing, harmonious over- and under- tone to lines, with practice and planning, you can get harmonic minors or country type fifths. Used non - sensibly, Sheer Bloody LUNACY! turn up a distortion pedal, rest your guitar (Bass in my case) against the amp, and decimate your audience with spacey howls, dog - scaring shrieks, and bowel loosening thunder! Emphatically NOT for everyone, but who wants to follow the pack?

It comes in a 10" by 4" metal box, stylishly screen printed, but probably not overly sturdy. It has one input, a direct out and an effect out, dials for mix, tune and fine tune plus a switch for bass only: i.e. that cuts out the over tones.

I'm giving it a five, because I love it for it's crazyness, it HAS serious possibilities in the field of melody and harmony which arguably raise it out of the novelty market, but for the 3rd time, it's NOT for everyone!

nibla's review (This content has been automatically translated from French)

Electro-Harmonix Frequency Analyzer Mk2
4
Ring modulation effect, he adds notes synthetic everything you pass in
100 to 100 analogue technology, not too thundering from Electro Harmonix ...

Trs simple configuration, intuition plays rather ...
personally, I just got it, I tried several instruments with sounds and everything Manir trs weird, but I think my Moog Prodigy will be used with most, because the sound of the p dale it lends itself best
with a guitar is also trs drole, vintage sounds astonishment if the well-RULES

The sound quality is standard, the PDAL also has a true bypass, it is all the same something exprimental trs, which will not suit all types of music. Reserved .. preferences fans hacks and sounds stranger!

There trs few pedals of this type I know, the only other currently available in France is the Moogerfooger, of course .. Moog she looks terrible, but hlas its price is also ... (2 times quasimment CHRE)

a unique effect (to get an IDE, go to the website Listen to EH and the DMOS audio, Frushiante in particular), yet express only feature of any hair, otherwise you only find little use this wonderful subject ...

Defines use that difficult so this is not conventional.
You should know that once triggered the effect you can forget your lines and what you believe connatre your instrument.
Unless you have an ide prcise sound you need, this is more the domain of expression as plug and play.

The potentiomtres allow rglage prcis. In fact it's almost a inconvnient because once your rglage found there will be quite difficult to rcuprer APRS other manipulations so the sound changes with the slightest movement of the potentiometer very ... I might be notched prfr of pots, which would have to find his rglages easier ... the possibility of dtriment ...
Any fawn, it is an effect which I call "scientific" so complicated grate.

The only other Ring Modulator I had the opportunity to test taient Intgr in multi-fx. I've never tried to Moog or the Gonkulator.
The sound possibilities are quite numerous, but it must be applied to find the sounds you have in your head.
Personally I use To create more noise than plutt normally play on my guitar. I put a delay APRS just the ring modulator in my effects loop, I let rsons agreements on the guitar and I play with potentiomtres the pedals to change the sound. The possibilities are noisy INTERESTED.
It is possible to create owl's also a balance rglant effect on lightweight, who has just agrmenter sound "dry". I come close to reproducing the sound of the verse of Eriatarka The Mars Volta. I do not know if it was Omar Roriguez CRER as this sound, but the result is close enough.

An effect that Relva domain superfluous for the average guitar but some will use it properly. Not empty handle will integrate and especially in compounds, it is a fact that has much to prove to the world of guitar and precisely, the doors are open to new experience!