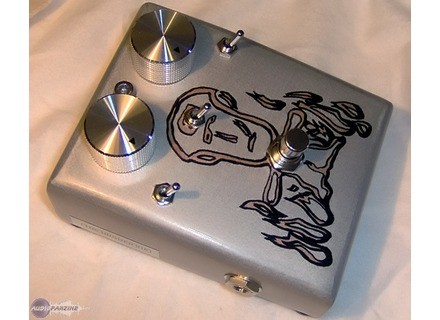 The Hugger, Other Guitar Effect from FuzzHugger (fx).

FuzzHugger (fx) The Hugger
5
This is one of the cooler pedals out there that I have discovered recently. It is ostensibly a boost pedal, but it has a lot of unique features. It has two 1/4" connections for input and output, as well as a true bypass output. It also has a bypass loop connection, which I'll explain more in detail. These are also both 1/4" inch. There are no MIDI or computer connections as this is an analog pedal. This isn't rackable and wouldn't be useful as a rack unit.

Using this pedal is a little tricky. It starts out easy enough but it gets tricker the more you apply it to different uses. It has two knobs to control gain (boost), as well as two switches to activate the boost. When being used as a straight boost, these act as input and output gain. When having another pedal in the boost stage, this can be used to boost either the input or output gain of that pedal, while bypassing the boost for the clean signal. Thus, there's a ton of variation to be had with this pedal, making it awesome. I didn't have a manual out when using mine so I don't know how effective it is, I ended up just watching a youtube video beforehand and knew what to do.

I like using this almost equally with all my guitars and amps, it doesn't necessarily favor one or the other. This is because it doesn't really overdrive the tone in the way that I like. While you could use it that way to nice results with a Strat and a Twin (my favorite!), I don't think that's what it's best use is. Rather, just as a nice, transparent boost is probably my favorite way to use it. I like using the pedal almost as much as a boost for specific pedals. While I love some of my pedals, some of them rob me of too much volume, and this pedal is great for isolating that. I also think that sometimes going into the input gain and increasing that can give certain pedals a lot more powerful tone.

I like this pedal for its versatility and variety. I know that sometimes just a normal boost doesn't quite do the trick. However, this pedal is probably a little too complicated to use for me. I tend to sometimes just prefer a normal boost pedal. The only time I bust this out is if I can't get enough boost from a certain pedal, that time I use the bypass loop and stuff and I end up getting the sounds I want. All in all, this is cool but it's definitely something you'll need after buying other pedals most likely.
Did you find this review helpful?yesno
»

Published on 11/22/08
The Hugger by FH(fx) is a brand new boost design, created by FH(fx) and developed with Mellowtone.

Other names: the hugger, thehugger