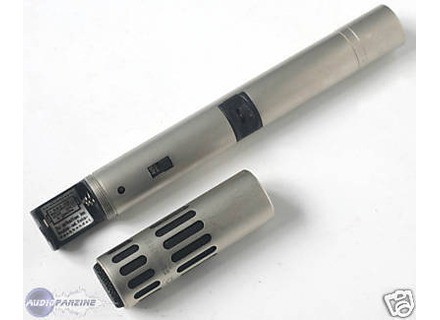 K3U, Other Microphone from Sennheiser.

Anonymous 's review (This content has been automatically translated from French)" small but strong!"

Sennheiser K3U
5
jai as a pair with two large capsule.
It was my father.
I tried these mics ... I remain con! (I put it behind the 6176)
we believe given the size that it will not ring ... bet and respect! I made a comparison with a 87 ... the thing that no one would.
I would not give my impression, but if it interests you, I am sending you the file of the micro and the U87.

a micro small but strong!
it sounds not hot it's a shame, but it does not prevent it hurt!

itrass's review (This content has been automatically translated from French)" Awesome!"

Sennheiser K3U
5
This is a Sennheiser microphone for all types of sound recording! Instruments, voice and even film! Indeed, it has several interchangeable capsules ... I have a Hyper cardio, cardio and an omni-directional. What to do stuff!

So, the type of micro ... I think it's a capacitor. Powered by a battery (usually!) 5.6 volt, which no longer exists, then by two 3 volt batteries. Or in phantom power supply.

I have been using not long ago in fact! My father bought it there is a good thirty years. I recovered a few years ago but do not use it very often.

I've used other micro before (and at the same time!). But it was dynamic microphones nothing to do ... (And I just understand the low cut filter, so my tests were wrong!)

What I like about this mic is its interchangeable capsules, very practical! The least ... I think I do not!

With experience, this choice I would do without hesitation!

In addition it came with a beautiful leather box (or imitation) which is very convenient to avoid damaging the microphone (unlike now where they sell a cover ... shame). In addition, the foam is rotted remains a bit on the microphone!

Otherwise nothing to say!

See all 51 photos of Sennheiser K3U »

Other Sennheiser other Microphones