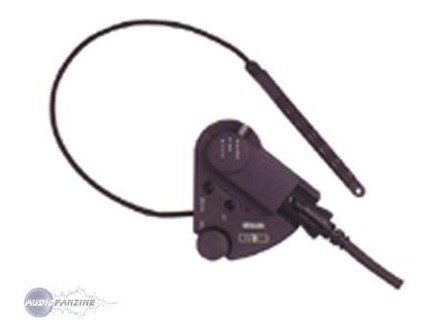 G-1D, Other Microphone from Yamaha.

Yamaha G-1D
3
The G1D is similar in all respects the good old Roland GK2. With one exception, the jack "Guitar" which is in 3.6 format against a single 6.35 Roland.
The build quality is fairly light and has ultimately nothing to envy to GK2 is the m ^ m level in this area.
The control box is obviously as bulky as the original.
Side pickup, no complaints, it works too well. There has obviously not the central screw available on the GK3 and adjusts the radius of the studs to follow closely the ropes, but honestly, with the optimization possibilities of most devices such as GK the Axon, the VG-99, GR-55, etc., it is not really a problem.

In short, today, for someone starting out in the field of guitare-synthé/MIDI and who does not want to ruin the G1D in secondhand is an alternative to consider, provided to be patient because we not often go on eBay and PA. But when it happens, it is found between 30 and 50 € the piece of plastic against 100 to € 150 for nine in current models.