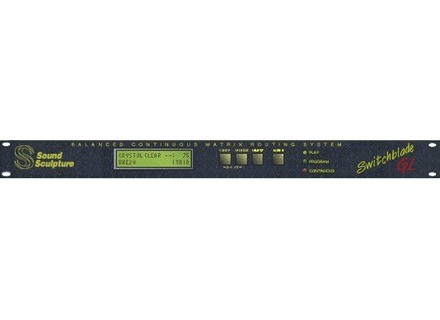 Spawn-X's review (This content has been automatically translated from French)" The Rolls Royce of routers ..."

Sound Sculpture Switchblade GL
4
I use routers rack for many years. In particular, I long my choice of the Voodoo Lab GCX of, but its design forced me because of my need to end up buying 3 with all that implies in weight, volume (in my 3U rack just to the routing!), and most importantly, complexity of connections ...

When I discovered the existence of GL, there were already several years that I hoped to find such a machine m ^ m thinking for a while to get into the electronics design with a friend. And then I discovered and it was a revelation!

Concretely, imagine ALSO HAVE, via MIDI, the ability to organize, enable / bypass, in any sense, in series, parallel, two, and much more, up to 16 effects loops. .. The whole, directly controllable from a single MIDI foot ... You dream? Soundsculpture did for you ...

You can name the various inputs / outputs of the Switchblade for easy configuration of each preset. Thus, when configuring a preset, it is easier to know what is going to interconnect.

But the switchblade goes well beyond the advanced routing. It can also fill the role of mixing since the levels of each virtual connections can be modified and saved in the preset, but it is also possible to assign these levels to an expression pedal.
It is also able to split any signals to any output. Attack 2, 3, or 4 preamps from one guitar becomes a breeze.

As Switchblade hides his game, it should also be noted that offers function relatively advanced MIDI routing.

My only regret for the interface that is relatively "old fashioned" and reduced to a relatively small LCD screen. The editing software helps tremendously to programming, but again, we regret his "aging" due to the technology that makes it a bit austere and not always very user regarding backup or other functions. Still, its use is almost essential if you want to program presets relatively complex. IUL is hoped that one day deign Soundsculpture out a newer version of this software, and at least, he did not abandon the support, because right now, to my knowledge, no competitor offers the smallest unit likely to happen to the ankle of the GL.

To get an idea of ​​the possibilities of the beast, I suggest you go download the editing software on the manufacturer's website. This software is actually capable of turning out any connection with the Switchblade and can therefore create preset off-line mode.
But beware, after that you can not get you out of the Switchblade GL mind and it will be an absolutely!