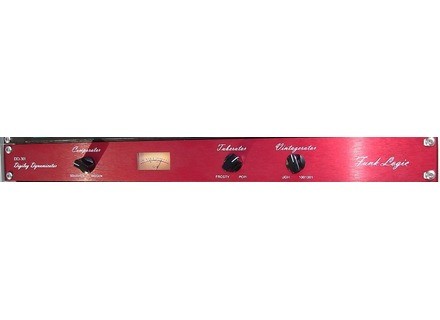 Funklogic DD-301 Digilog Dynamicator
3
The Funklogic DD-301 Digilog Dynamicator is one of the most unusual music products ever conceived. It is a rack space filler that is supposed to look like a fancy rack processor. When I first ordered this product, I envisioned that it would be in the form of a standard rack-mounted metal box, and it would have a nice looking front, but there would be no plugs on the back, no electronics. I could then show it off to friends as a practical joke, or pretend to mess around with the knobs during recording sessions, and see if anyone says, "Yeah, it does sound better now with that Digilog Dynamicator on".

There is also a fake UV meter in the middle, and it doesn't even have a needle: It's just a piece of paper with the meter printed on it, and if you really want, you can shine a light behind it to light it up. Again, I was under the partial impression that this product plugged into a wall, and that it would light up internally. That is not the case.

Even with all of these shortcomings, I still had a good amount of use and fun out of this product. At a distance, it definitely looks real, and I've certainly fooled a few of my friends into thinking it was a real product.

(There are no sound qualities to describe, this is simply a decorative plate)

Overall, this is an interesting joke product, and in the studio, it actually could be useful to fill up rack space, or prove to clients that they are just hearing things. At the price, I do with it felt more solid, and looked a bit more realistic. Pick this up if you can find it cheap online!
Did you find this review helpful?yesno
»

Funklogic DD-301 Digilog Dynamicator
1
The Funk Logic DD-301 Digilog Dynamicator is one of the most unique pieces of gear on the market, in that it does absolutely nothing! It’s merely for show and for the placebo effect. Its really a joke, although you will find them in studios that are in on it! The current studio that I’m working at has one of these, it’s definitely a good conversation piece if nothing else. It is cased in a single rack mountable casing.

Since this doesn’t actually do anything at all, you don’t need to know anything about it! The parameters that the DD-301 has to labeled include those for ‘comperator,’ ‘tuberator,’ and ‘vintagerator.’ It also has a ‘UV’ meter, which of course is a play on a VU meter. All of these parameters are jokes and actually don’t do a thing!

Everything that you run through the Funk Logic DD-301 Digilog Dynamicator is completely transparent and won’t color your sound at all. Of course, it doesn’t actually affect the sound quality in any way, so if you’re hearing anything it’s a placebo! Not much more to say about it’s sound quality as it doesn’t have one at all…

While the Funk Logic DD-301 Digilog Dynamicator doesn’t actually do anything at all, at the very least it’s a funny joke. If you had one of these you could trick your friends by telling them that it’s the best piece of gear in the world and ask them if they hear the difference! I’d bet that more times than not they would think it sounded great! It’s a really inexpensive piece of equipment of course, from Funk Logic who is primarily known for making casing, which I guess is exactly what this is. The fact that the DD-301 does nothing at all can be your little secret to your clients…