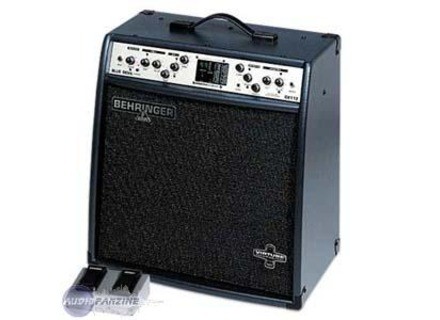 The Blue Devil has plenty of power for practice or a small gig! Still easy to carry, but has great bass response and volume to spare. The 99 preset effects are very good. The clean channel is fantastic! I would put it up against any $1000 amp!

The distortion channel is a little weak if you like to use a heave crunch. A good distortion box in the clean channel is the best way to go with the Blue Devil.

It is very rugged and easy to carry. Haven't had it long, but seems to hold up well.

Fantastic value for the price. I've never seen a unit with so many features for anywhere near this price!

I bought this amp for an up coming gig because I was tired of using one of my other band memebers 120's (My current amp sucked.....alot!) Turns out I got way more than I payed more with the effects, and volume. Also with the stereo out option, I was able to run it through the PA system which helps alot when you have only 60 watts of power.

ONLY 60 WATTS. Never seen a bigger one.

Behringer Blue Devil GX112
2
I paid $300 from an online store because it had great reviews everywhere i checked. They forgot to mention one thing.

The effects are pretty good and the effects loop is usefull. The sound is great. I love the sound and it works well for small room gigs or recording.

I've done about 3 gigs with this amp and at two of the gigs (one last night) the amp died on me. I just suddenly stoped working. The power was still on but the guitar was not soundig. Great sound does not make up for an amp dieing on you at a live gig.

It's rugged. I carry it around quite a bit. Unless the sound loss mentioned above has to do with moving it because i don't abuse it.

It's good sound but, like I said, good sound doesn't make up for an amp that dies. Just don't expect to use it for live gigs.

Behringer Blue Devil GX112
4
I'm a beginner guitarist. Prior to purchasing this goody, I had been using my computer speakers and/or a tiny little practice amp. Needed something better and louder. Did some research, and Blue Devil had the best price/performance ration. Paid around $210 at an online musical gears store.

This IS a solid state amp. Make no mistake about that. So I wasn't expecting tubes performance. But it sounded better than I had expected. Two independent channels: Heaven and Hell (distorted with gain, and clean). They have some "Virtube" gizmo which is supposed to emulate the performance of a tubes amp. Well, it doesn't sound entirely like a tubes amp, but certainly sounds better than your average solid state job. 60W output, which is more than enough for home practice and maybe a gig for friends at a coffee shop. One thing I like about this amp is that it has built in effects. Not the best sounding effects in the world, but on par with cheapies such as Zoom. I bought the amp for its amp, so anything extra is a bonus. Pretty solid. Doesn't look like it's going to break down anytime soon.

The effects could use a numeric key pad. Only two buttons for scrolling between 1 to 99. The foot switch is nice, but would be better if the pedals are assignable to page through different effects (as opposed to simply toggle the effect on and off).

Solid job. Built like a tank. I could sit on the damn thing while I'm playing (not recommended). All the parts look like they can take up to years of beating. Only thing that may break down are those little buttons for effects. Only three buttons, and you have to press them all the time.

This review was originally published on http://www.musicgearreview.com
Did you find this review helpful?yesno
»
Read the 11 user reviews on the Behringer Blue Devil GX112 »