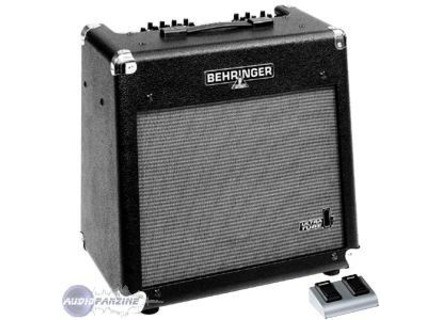 Behringer Vintager AC112
5
I've been looking for an amp for home so I don't have to crank up my 50 Watt Marshall Super Lead, but I didn't want to sacrifice too much tone. I also wanted an amp that works well playing blues and rock. I saw this amp in a pawn shop and had no knowledge of it at all. When I asked about the $50. price tag, they said it had a volume issue. I left but turned around and went back in to check it out further. Sure enough I plugged in and the clerk said "see?" It barely made a sound. Then I saw that the master volume was on 1/4. I turned it up and shook the windows. I said I'll take it!. I've been gigging and rehearsing with this amp and I love it. Tonally it's easy to dial in a sound. it holds up after hours of playing and the DSP effects are not thin in a club setting. I'm playing a Strat most of the time. The first time I plugged my LP into it I was thrilled with the amazing tone! Thanks Behringer!!! If I lost this one, I replace it in a heartbeat, and wouldn't wait for a $50. deal. As it's been said the Jensen is sweet. I only wish it had a speaker out to go into my 4-12 Celestion-loaded Duncan cab. I can only imagine what that must sound like!
Did you find this review helpful?yesno
»

Behringer Vintager AC112
5
I've been using different amps over the years, had been using a Peavey Bandit 75 for a few years because you can hurl them out of an airplane and they'll still work. Mine finally croaked. Tired of fixing it, so I checked out a bunch of amps. Been really intrigued with Behringer stuff because of the price, but also some pretty amazing features. I have one of their compressors that I use for my studio and it's great, and also a headphone amp. So, I checked into several of their amps, and overall, I decided the AC-112 with a vintage tube sound along with a lot of digital effects would be good. I'm trying it in my studio now, and so far, it's great. I paid $299 for it. Free shipping.

The clean and distorted tones sound great, I'll know more when I use it at a gig, but I don't see that there'll be any problem. Actually, I think this is just the punchy little number I've been looking for, and it's quite tweakable, so it should work great. The amp is larger than I had thought, but not in a bad way, and it's not really THAT heavy, unless you're a wuss. I like that you can use a midi foot controller with it to access the parameters, since I already have a big old Boss controller just sitting around. I may end up getting a Behringer controller with the 2 expression pedals, since I use a volume pedal and Wah. Another thing I like is that I may not have to use much or any compression with this amp. Most amps or pedals with digital FX include compression, but it's always crappy and grainy sounding, I can't stand it, so I always use an outboard compressor pedal with anything I use. May not be a problem now.The controls being on top like an old Vox or Ampeg might be a drag, but I knew that when I bought it, and I think the pedals will eliminate that from being a problem.
I like the tone. The distortion is great, I think it's exactly what I've been looking for

So far, I've liked everything. It seems like a slight hassle figuring out how to set up the presets, but hey, I'm lazy.

This thing is BUILT. Very solid, and it looks much better than the photos lead one to believe. It's a great combo of vintage and modern. The controls on top are laid out logically. I may build a padded half box to slip over the top before I put it in my road case, as the knobs, though flush to the top of the amp, are in a bit of a vulnerable position.

I'm aware that there may be some slight problems with this amp as I use it at gigs, but I've read a lot about it online, and for instance, the buzz of the cabinet that is the main gripe I've heard, I also read it can be fixed but putting electricians tape around the 2 sections of the amp. That would require taking it apart, but this amp has enough features that it appears to be worth the little extra effort. I doubt there will ever be one amp that covers all bases, but this may come close. I'm surprised at how much I like it already.

Behringer Vintager AC112
4
I really want a tube amp but was put off by the price, so after reading the glowing reviews of this amp on this site I decided to buy one from GAK.co.uk in Brighton (£169.00) a load cheaper than anywhere else!!.

It arrived next day and I was blown away with the performace of the unit (it's seriously loud!!)

If you play with the master volume below five the sound turns quite dull and weak but (heres the good bit) you can regulate the volume with the seperate clean and overdrive channel volume controls. So no biggy!

Built like a tank although some of the controls are a bit wobbly and feel like they may fall off!

The headphone jack on mine stopped working and when I contacted Behringer they told me to send it back to the shop who would send it to them, it was repaired and returned to me within 8 days.

This really is a fantastic amp for the price, I was a bit pissed off about the headphone jack but Behringer proved to me that they are dedicated to customer satisfaction.

If you can't afford a full tube amp, you can't go wrong with this. Top stuff!

Behringer Vintager AC112
5
Baught this amp on ebay. needed another tube amp to replace my old non working ones.
Payed under 300 bucks.

I like everything about it 'cept for that it is not made in USA. Love the effects, took some time to get acostomed to them but now I love them. It sounds better than anything I have heard in the $ range. What flexibility this amp has, i just love it man.

Built well, no buzzing, no loose parts to rattle at hi volumes. built like a brick shi* house.

This review was originally published on http://www.musicgearreview.com
Did you find this review helpful?yesno
»
Read the 16 user reviews on the Behringer Vintager AC112 »