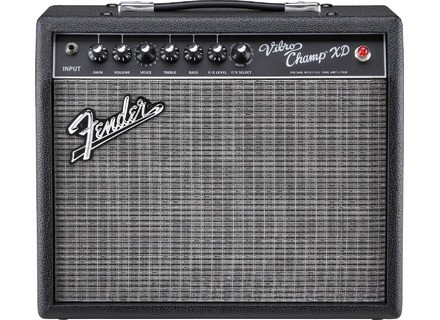 Fender Vibro Champ XD
4
Let me begin by saying I'm not a fan of amp modeling. This amp is sort of an amp modeler even though they don't advertise it as such. The don't have a control knob that dials in certain amps that they are recreating, but they have a dial that is called voice which essentially does the exact same thing. It does change the voice but it can be very dramatic like an amp modeler would do. When I think of voice changing I think of something subtle that slowing changes the voicing, but not sounds completely like a different amp. Not that there is anything wrong with that but it does amp model. This is a cool amp!

I am not generally a fan of Fender's approach to amp modeling. I think Roland and Peavey do the best at amp modeling. I have never been a fan of Line 6 modeling either. Their sounds are always thin and brittle to me. Which is the same feeling I get with most of Fender's amp modeling tones. However, this amp has gotten my attention. This one to me is by far the best example of a solid amp that has a hybrid circuit. I'm guessing what that means is they use solid state along with the preamp and power amps tubes that are in it. This feature is what gives this amp a leg up on the other Fender amp modeling products. It actually has a natural feel and sound to it because of the tubes.

Another nice features is that it has effects built right into the amp. So this an great amp for bedroom playing or office playing and all you need is a guitar. It doesn't have a headphone jack so you cannot play silently.

A couple more great features is that it has a speaker output which means you can hook it up to a 2x12 or a 4x12 speaker cabinet for some pushing of air. Plus it has a line out for going into a power amp, direct PA, or even a recording device.

At new these units come in at around $240, which isn't a bad price. For the options it has and the price point they come in they is a great value for the money. If you are looking for a solid practice amp that will be a good learner amp for beginners or even something that won't be too loud that gets a good sound, then this might be your amp.

Fender Vibro Champ XD
4
The Fender Vibro Champ XD is a modern day amp, modeled after the vintage Vibro Champs. This is an all tube amp that is quite small, delivering only 5 watts of power. It's got a 6V6 tube as well as a 12AX7 preamp tube. The speaker is an 8" one, and the amp also has a built in effects. The amp has a single 1/4" input in the front and a 1/4" line out and speaker out in the back.

The make up of the Fender Vibro Champ XD is really quite simple. Most users shouldn't encounter any issues with it as it is pretty straight forward. The parmaeters that it has includes those for gain, volume, voice, treble, bass, FX level, and FX select. The voice parameter is for choosing between 16 different preset preamp sounds, which basically gives you a wide array of different types of sounds. A manual shouldn't be necessary for most users.

The tone of the Fender Vibro Champ XD is quite good for a little 5 watt amp. There is also a lot that you can do with it between the 16 different voices and the effects. I've used the amp for a recording session with a Fender Stratocaster and no other effects beyond what's on here. I'm a big fan of the clean tones on this amp, as they sound very bright and full. The voice parameter allows for a lot of flexibility with your clean sounds as well. The built in effects include tremolo and reverb, and most of them are pretty good sounding, although they didn't blow me away. For an amp that only has 5 watts of power, the Vibro Champ sounds pretty awesome.

The Fender Vibro Champ XD is the perfect practice amp for players on a variety of levels. It's got a lot of versatility, which isn't something that you will normally find on a five watt practice amp. This amp can give you a pretty loud sound, but it's not suitable for live shows in my opinion. I'd really only recommend it for those looking for a practice amp, with the added bonus of being able to use this in the studio...

lukang71's review (This content has been automatically translated from French)

Fender Vibro Champ XD
4
lamp class A, but all is said dj (5 watts, line out, no bypass to heat lamps, but on 5 watts used in moderation, can be not essential)
No flanger phaser, damage;
You can not combine tremolo and reverb, damage ..

Very easy to use.
Although he plugs it sounds and in all configurations it offers, cd, a series of modliss amps.
The simulation of the Tweed is very compressed, and no way to get rid of the default, with pedal forward, Booster, overdrive in modrant volume is enough drangeant .dropoff window
Fortunately more saturated versions of the amp are arranged in position 2 and 3.

The sound is compressed on the First modlisation
Blackface in 4,5,6 position is drier and right. he agrees very well all the pedals that I put in front of him ..
I then use the 7 and 8 is british. 7 is excellent, bright enough, in general I add a clean boost. Perfect for the English blues, a little dirty.
So even if it is compress, position 1 is my prefers for blues, rhythm and small clean a little nervous (or not for that matter), it is very clear shiny and full, with a strat for example.
We know we have an all-tube ds First notes, I do not know exactly what would be a real tweed, but in my 15m j think I will not find better than this little vibrator.
In short, in Gnrale, I leave it on his first position, I am not really playing with the equalizer, or with the effect, I put the reverb, reverb position 2 to "normal" and 3 to create a depth effect, then you can surf or play some post rock the Labradford. (It's also in this case I wanted the tremolo combined with revrb)
Module I my sound with the volume and tonality of my strat ..
I do not use very saturated sound nor the jazz king, I don know how to play jazz, it may be only for this simulation turns me specially ears.

I've had 6 months. I had a pure lamp before a Laney VC 15, I miss sometimes, but ds my little room I not doing too much honor.
The vibro XD field remains powerful for use in the room, I know not all can be its rich sound, but it really helps to have some fun, a very reasonable price.
If you like clean sounds go there ..
Did you find this review helpful?yesno
»

its realistic light fender with severe limited. Distortion uneven but very usable for work. The limitations are due to the small amplification and HP 10.

Worked well for the home.
Sold for a Blackstar HT5 for the same role that is better distortion especially the latter with reverb and HP 12

Did you find this review helpful?yesno
»
Read the 14 user reviews on the Fender Vibro Champ XD »