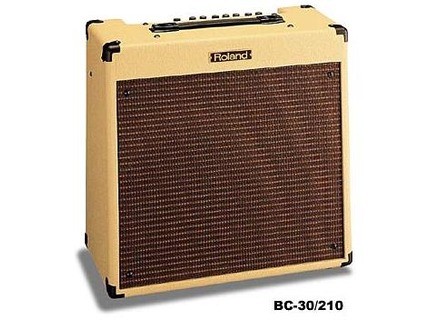 Roland Blues Cube BC-30 210
5
I found myself in need of an inexpensive guitar amp fast when a band member knocked my borrowed Fender Blues Jr. off a chair and it developed a nasty reverb buzz (not to mention an irritated owner). Blues Jrs. have doubled in price in the last three years. I recalled a positive experience I had years ago with a friends little Roland solid state, and so I persued some online reviews of current products. I suspected I was onto something when reviewer after reviewer raved about the BC-30, a little solid state, single 12-inch speaker combo configured much like the Blues Jr. and clearly aimed at the same market, that is, players of blues, 60's rock, country and the like. (That the couple of negative reviews came from shred rockers who felt bitterly decieved by this amp's claim to tube-like sound only confiremed that I was on the right track). At a list price of around $400 dollars and a sale price of $189.00 at Musician's Friend, I felt safe enough to take a chance, and clicked.

Four days later my blues cube arrived at the front door. With some trepidation I pulled the sharp looking beigy tolex unit with the brown grille from the box and fired it up with my 1960 Kay F-hole electric. I almost fell over.

This amp is unbelievable. It is, first of all, silent (a nice change from tubes and especially so when one uses single-coils pickups, for which the manual says the amp is optimized). The bass is rich, smooth, and natural, and with none of that thin hardness of older solid states. The mids are detailed and natural, and subtleties of pick attack and dynamics are beautifully captured, detailed without being clinical. Ah, the all important highs; clear enough to use the neck pickup of a strat, natural enough to use the bridge pickup with no apologies or adjustments. I took it out to a gig the next night in a medium sized club and discovered that as well as being plenty loud, this amp is considerably more versatile than the blues junior, cutting through especially at the top end with more authority and delicacy.

Nothing! Could use a reverb but with my Boss ME-5 I don't care.

Buy one! I play 50's through 2000's rock, lots of chuck berry, beatles, motown, everly's etc. Perfect. Unimpeachable. Haven't gotten to the overdrive channel yet but it produces enough distortion in the normal channel that I doubt I will.

Roland Blues Cube BC-30 210
3
I acquired this amp off of musician friends for nice price off 200 dollars. I was looking for something to play the blues with for a reasonable price, and the bluescube was it.

I like the fact that it has 2 channels, one the clean channel and one with pre-volume and a post-volume. Turn up the pre for a little gain and post to even it out. I turn the pre to about half of what the post is at. Killer blues sound right there!

It is 30 watts and i was playing with a band down the street the other day and i had it cranking and it was pushing it there. Although it is nice for little stuff and playing in the basement with your friends. It is also solid state but when you crank it up it gets that warm tube sound. It also doesn't have reverb but does have a presence knob.

This amp was built with great quality and has never had any problems.

Bluescube says it all. It is a great amp for the blues and probably jazz and country. If you're gonna play heavy metal you may as well by another amp or get a pedal. Over all it is a really nice amp.