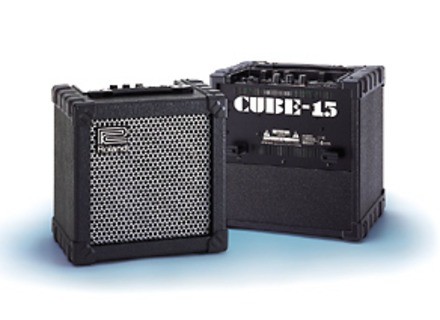 Roland Cube-15
5
I purchased this unit at Lietz Music in Panama City, FL. I had been lookining for a good quality practice amp that was portable and had a headphone jack (for my wife's benefit during late night practice sessions). I paid about $119.00 for this unit.

The major factor that struck me about this amp was the sound quality. This thing is rated at 15 watts but sounds like a huge amp. The "clean" channel sounds very clear and crisp with almost no hiss or hum, but the "lead" channel is where it really gets cool. It comes with four built-in distortion settings:Overdrive, Distortion, Metal, and Metal Stack. You don't need to buy extra pedals because they are built in. The headphone jack is also a recording out jack for direct recording hookup. It comes with an AUX IN jack for playing along with CD or drum machines.

The only thing I have a complaint with is the fact there is no volume control for the CD input. The volume must be controled from the input device.

This amp seems very well built. The cabinet is very sturdy with high impact, full across corner protectors. The front grill is metal mesh which should protect the 8 inch speaker from any damage. All the controls are top mounted. There is a seperate volume control for each chanel and a gain control for the lead channel. There is three band equilization (bass, mid, treble) that works for both channels. There is a channel select button and a selector knob on the lead channel for the four distortion effects. The built-in effects are supposed to be modeled after several of the BOSS pedals and they all preform very well. The is an AUX IN input and a Recording Out/Headphone output. As for quality, it is built by ROLAND. What more can you say.

This is a fun, well built little amp. For the price of about two of the BOSS pedals, you get four quality effects and a great sounding amp thrown in to boot. This amp will be great for personal practice and would be very good as a small recording amp, especially with the built-in effects. Really portable. The Overdrive setting does great blues with my tele and the Metal and Metal Stack should satisfy even the hard core metal players. I would recommend it in a heartbeat and definitely replace it if anything happened to it.