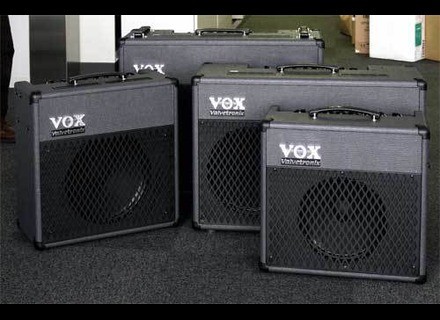 Vox AD100VT-XL
2
The valvetronics amps from Vox are just a complete waste of time. These amps sound so bad that is makes playing the guitar a joke. It also makes Vox look like a joke by putting out amps that sound like trash. Vox is one of my favorite amp builder, at least it was, but have just been so set on putting out cheap amps.

This is an amp modeler that sounds like you would thin an amp modeler to sound....like a process cheap piece of garbage. These amps are such a disgrace to the amp community and th sound of a Vox trying to do a US metal tone is laughable. Vox trying to sound like a Mesa Boogie is just flat out ridiculous.

The sound of this amp is terrible like I mentioned above. The amp has 11 different models and some of them sound decent enough to jam at home on but most just come up very short. Not that it is all Vox's fault because you cannot recreate a real tube amp in some digital casing.

You can try this amp out with any guitar because it really doesn't matter what you use. This amp is a processed box of trash. No way would I ever put out an amp that sounded like this if I owned an amp company. This should be an embarrassment to Vox and friends.

The amp just processes you guitar playing and it doesn't feel like a real amp at all. They just mimic the notes you would hit and leave dynamics completely out of the equation.

These have been discontinued for newer models so the used market is the only way to go nowadays. These amps can't be much more than a few hundred dollars in today's used market.

I would only recommend this amp to someone testing out whether or not they want to try the electric guitar. This is for a beginner player who needs effects and an amp all in one.
Did you find this review helpful?yesno
»

after 11 and many types of amp simulation all adjustable volume gain and bass trebble medium plus 11 combinations of effects including reverb chorus flanger auto-wah tremolo etc.

We get ready to just any type of sound, and yes this amp versatile and above on the manually not content to be clear it is more useful

My style of music? and if one day it would have in the blues rock or something like that but it happens exceed m in metal or of another ... so good
in terms of gear and many a black viper Esp jy but have also played a godin (and a stagg-_-imitation strato -_-') regard to the effect that the amp j ai pa mal I added a loop station (RC boss 2) and a boost (behringer) (among others)
According to the sound, well my time there that his light would be enough to satisfy me but the amp simulation are exellent

Vox AD100VT-XL manuals and other files