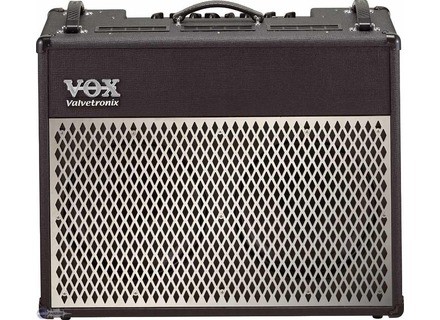 Vox AD100VT
1
This amp is a digital amp with some tubes in the pre-amp, or so the salesman told me when I bought it. It actually is better than any digital amp I've heard at recreating the sound of a tube amp. There's plenty of effects built into the amp, like delay, chorus, rotary chorus, compression (the compression is particularly good), reverb, auto-wah, and a few others. The amp modeling is pretty diverse, ranging from incredibly clean to the point of sounding sterile, and ridiculously distorted and everything in between. I found myself doing a decent Neil Young and Crazy Horse impression (circa Rust Never Sleeps) one minute and immediately sounding similar to Pat Metheny just by flicking the switch. There is a footswitch, generally sold separately. There's an external speaker connection as well.

The amp is easy to use for the most part. It will take some time to go through all the sounds it offers, and finding your favorites will be hard work. Getting a good sound tends to be a matter of patience, as there is a lot to choose from. The effects are really an enigma at first. The manual helps explain them pretty well, but the effects are still pretty tough to get used to. There are two buttons and two knobs that control all of the effects, and the functions for each effect are different. It can get pretty confusing after awhile. Sometimes good sounds are there (like the aforementioned Crazy Horse sound) but there's certain things you're just not going to get out of this amp, no matter what the dudes at Guitar Center tell you.

The sound would suit my style of music more if it didn't crap out on me shortly after I bought it. I realized at one point that it wasn't picking up quiet frequencies, and therefore it wouldn't sustain for very long (not only that, but it would decay rather viciously once it reached the threshold of quiet sounds.) I use it with a '67 Strat reissue and it can sometimes sound pretty sick, especially when you are going for some JAMC or Sonic Youth-sounding, feedback drench noise-fests. Sometimes it can get a good bluesy tone if it's warmed up nice. Don't expect to really be able to stretch out as a player, because the aforementioned sustain problems will frustrate you to no end. I particularly like the AC30TB and UK 80's settings. The boutique overdrive is sometimes cool for heavily distorted lead playing. The reverb is good, but some of the other effects are lame (auto-wah is dumb, tremelo could be better, rotary reverb is a cheap knock-off).

I've had this amp for about two years, and I get more and more frustrated with it all the time. I didn't want to shell out for a Fender Hot Rod, and now I'm paying for it. I hate how it kills the sound of my brilliant guitar, and I hate the sustain problem. I tried getting it fixed and they told me they couldn't do anything about it at the store I bought it from. I tried some of the other tube amps, liked them, but couldn't afford them, so I went with this. HUGE MISTAKE! It's pretty cheap when it's on sale, but that doesn't make it worth it. Don't buy it.

dobermann masashige's review (This content has been automatically translated from French)

I find it great! I have 30 watts 30vt is repeated a little lightweight (normal, a 30w) but recording, live sound card, it is impcc! not breathe, nothing!
the use is simple, the fact malgres well lean on to get a cool sound!

I love all the sounds, again, on the site or have vox can listen to the demos, for once, the sounds are identical to reality!

Minimum: 2 channels ... you can mess with a "pseudo" 3rd by preparing a sound without saving
on channels "write"
I remake this choice without worry
c is a very good compromise for all, with a very wide range of sounds!
I would not mind rises the 30 hp vintage 100watts and at least a further 3 channels available!
Did you find this review helpful?yesno
»

Vox AD100VT
4
Well I decided to post my opinion on this beast.

- 100watt
- Amp simulation with a lamp in the preamp (if I remember correctly)
- A slew of famous amp simulations, a slew of effects (I used mostly reverb and flanger are pretty good) and the ability to program two channels manually.
- At the rear of a button thingy handy power level so as not to break the ears and still have a good sound
- Footswitch, send, return, external speaker (pinaise when I passed by this output to return to the facade of the great concert loudspeakers were automatically logged out Oo I hope it's just that mine was hacked ... weird)

The configuration is not complicated, the equipment must be tested to find its sound and it makes the rest of the job alone. I've never had a manual and it would have been useless, I use mainly amp simulations, handy for me since I started with and I was immediately a good sound without too I dig.

"Will it fit your style of music?" XD It suits all this amp, it can do everything from clean to metal and punk rock that I do is perfect like that, I have a knob all the sounds I want

I play only with guitars equipped with humbuckers, an Epiphone Les Paul Junior (95euros for that quality Oo I ressaute above as soon as I can afford at least a scratch that I'm not afraid to fuck up in concert ^ ^), a squier jaguarmaster, a Viking with Westone wilkinson humbucker (not bad) and a gibson sg special. To me this sounds great config. I also offered a Fulltone overdrive (lack of footswitch oblige ...) and I think it's my best stuff for now ^ ^

Basically I'm never disappointed with the sound, I would move to something more personal way of looking, but the amp does all sound very easily / quickly.

I use it for 2 years now, this is the only amp I've had so far and I am leaning toward the all-tube (electronics is ruined, the amp still works but I have plenty of its parasites that oscillate between a honeycomb in flight, a series of noisy gas, effects that I think would work well in techno ... well even when I put the guitar volume to zero I have these weird noises and I do not see how I could fix it so I want to move the lamp / solder / son to be able to hack it myself since I'm an electrician ^ ^)

Good of the game more or less:

+:
- No worries of power for any concert / snooze
- Versatility!
- Easy to get good sound
- Good effects
- Look cool (I love the front grill overlap I think the amp into a cabinet with a very special look ^ ^)

-:
- It weighs a ton Oo I'm really sick of me peter back
- Mail: @ yeah I expected but I'm not there ^ ^
- The speaker out that disconnects the internal speakers

Finally, super good deal for the price, I recommend it to anyone who starts or who does not want to dig to find a sound, it should be ideal for jams provided they are muscular like Rambo .. .
Personally I would do more this choice but I spent some time with this amp and I'm not disappointed, if I could see myself two years ago before I buy, I would push again to buy; )

Vox AD100VT
3
For my part I use the AD100VT (100w), I think CHARACTERISTICS are more or less the same as the other models (ad60, AD15 ...) transistor amplifier with pre-amp a lamp (12AX7). It is equipped with a standard connector, an input device in front, a headphone jack (the speaker breaks the circuit), a LineOut, a speaker out (it seems that a well with a spit deuxime pregnant! ?) an effect loop and a footswitch between. Good for the rear knob level that allows to enjoy all the gain volume "bedroom". The rglages are simple and made of the effects are "classic" (reverb, delay good, I find autowah infficace, ...)...

Bte any configuration! Ms too! This amp is packed with effects, simulators, etc etc ... but scnique use the switch does not allow a large farm, a MIDI controller handy t have the choice of simulation and effects! With a controller like the FCB1010 Behringer ...
You can have the sound on, adpote enough (but hey, I am a former user of V-amp so it can be the result of board on amp gives me that impression ?!!). The manual is clear but not need to Polytechnic to understand this amp in the first quarter of an hour of use!

For now has for me but I used only the "sound" of the amp even him. I go through the loop with an effects processor and I use just those of the amp. I play an Ibanez PF150 dj that sounds good so the only clean satisfy me well! For distortion, I increase the gain a little swelling and I all with the Fabtone (Danelectro) ... The presets are nice rock, classs with "eras" (60's, 80's ...) and cleans but the sounds are Mtal too sandy and lack of grain!

The +: some nice sounds
The -: No MIDI control amp a bit heavy ...
The ratio quality price is clearly seen the possibilities of the amp! I think selling it ...

Did you find this review helpful?yesno
»
Read the 8 user reviews on the Vox AD100VT »

Vox AD100VT manuals and other files