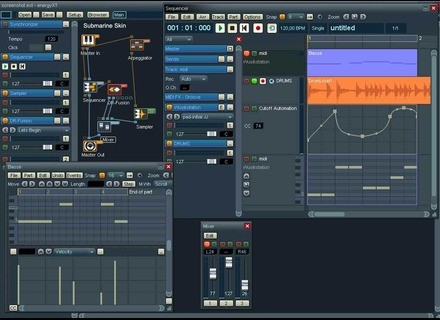 Xt Software energyXT
5
Ultra extremely simple, simply unzip the file sa.zip download and run the executable.
For Vst use, go put the dll in the right directory if you hold consolidate all your plugins.
The dblocage soft grace of the key is also a dconcertante ease: in the software, apply save Energy Xt, pick up your file and voila it's massiva torch!

Config on my laptop, it's perfect: the soft consumes very very few resources and manages perfectly all plugins.
If you have a pc and clean vst, you will not be able to plant it!
The Xt performance is inspres for soft so cheap, in memory of a man I never met as stable program.

I use it for 6 months. Initially purchased as bote vst tool, it quickly became my main squenceur so it is simple and powerful.
I love everything about this app, the possibilities to couleures, not from the price: 39 it's really a gift!
Buy the eyes closed.
Did you find this review helpful?yesno
»

stanlea's review (This content has been automatically translated from French)

Extraordinary
Did you find this review helpful?yesno
»

zieQ's review (This content has been automatically translated from French)

Xt Software energyXT
5
- Installation is it without problem?
Fastoche, download and decompress some zip. But since the software evolves constantly, it's not easy to keep up ... Fortunately, there is a small utility called EXT-setup makes us good life ("Automatic Installer / Updater for EXT" in the Resources section of the site).

- Have you experienced any incompatibility?
No, not personally. I heard about some problem with some sound cards but with the re-enable the developers, was not last very long.

- The configuration gnrale is easy?
Extremely simple, one page to configure audio / midi and one for directories effects / VST synths and rolling.

- The manual is clear and sufficient? ...
There is no manual "official" but we kind contributors pens ... in English only. Just search the site or request updates downloads in ext-setup.

So I put 8 because of the manual and the installer that are Intgr default!

- The software works he correctly on this configuration?
Yes, nothing wrong.

- What performance? (If quantifiable)
I use a studio I used to record audio and put effects, record MIDI tracks and paste the VSTi and mix everything. In all these uses, the software runs impeccably well and eats too much memory and processor, which allows the use of VST / VSTi gourmands such as DFH Superior.

- This software + hardware configuration is stable?
Ben sr, if you are careful to use their VSTs stable too! (That is - to say not mine: D)

- How long have you use it?
Almost a year if I remember correctly.

- What is the particular feature you like best and least?
There is little prs everything I need (in musical eh: D) without a staggering rate.

- Have you tried many other models before acqurir?
I (like everyone) throw an eye Cubase is great, but the price is the bte compltement deterrent. I also test Fruity Loops but can not record audio with ...

- How do you report qualitprix?
Super, this software a rating Misra: thirty euros. Given the number of features, no photo, is the best in squenceurs qualitprix report. We can always blamed a lack of features compared to large squenceurs such as Cubase. But rest assured, the dveloppeur this app is the users' costs and continues to make updates (Free!) Intgrant even more features.

- With the exprience, you do again this choice? ...
Carrment, I am the best squenceurs considering its price. In addition, the designer is the TRS would cost it can only s'amliorer. So plutt twice a choice I would do this!

It's worth a 10 for the quality-price report and re-enable the designer!
Did you find this review helpful?yesno
»

oliv928's review (This content has been automatically translated from French)

Xt Software energyXT
5
No problem. there is also a program to install the full package (exe, directories, VSTi, VSTe, help) that al air to function properly as well. for the manual, and although there appears to be several. we are a bit lost in the profusion of BG and tutorials, various sites ... c is good but a nice cot too. some still unfinished site. d or 8 note

Laptop with Turion MT37, 1G ram, dd 7200.
ca tounre very well, except for smf "recupres here and lquot, (the net): desynchronization or rather delays in some tracks. j have left many topics about this but no r response. on my personal projects at the moment the AC did not seem (too) happen, but I remain vigilant. m more time is needed to fully judge. or of my note (which I hoped provisional) 7. I sorry just the developer that I asked him about the subject remains silent on the subject.

I note even when the general note 9, despite what "worries" of dcalage because I adore:
the ergonomics, hand or view it and patch it like crazy road, the possibility that the air really incredible. Are being discovered every day new. the aesthetic is simple and plain relaxing. the sequencer is very ergonomic.
a small problem for project management and its various files and directories that n is not immediate take control (browser, audio_folder, ca ... drunk a little beginners, see annoying but you have to go right on course .
c is the only app that allowed me to split, "layeriser", "velocity layeriser" my midi keyboard with a few clicks without opening the doc. d c was also my motivation to dpart for purchase.
Did you find this review helpful?yesno
»
Read the 7 user reviews on the Xt Software energyXT »