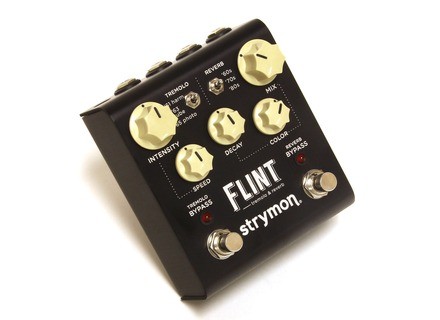 Flint, Multi-effect or other modulation effect from Strymon.

Strymon Flint
4
The Strymon Flint was inspired by the traditional pairing of onboard reverb and tremolo effects in early tube amps. The Flint features two sides for each effect, each with three modes to toggle between. For tremolo, you have the '61 harmonic setting, the '63 tube setting, and the '65 photocell setting. For the reverb side you have sounds from the following modes: 60's (spring), 70's (plate), and 80's (hall). Each effect has separate controls and can be activated individually of one another. Holding both bypass switches, toggles secondary functionality of the controls which include boost/cut controls for each side of the effects, tap subdivision, and effects order.

The Input/Output section of the Strymon is rather versatile. An EXP input can accomodate an expression pedal, tap tempo, or one of strymon's favorite pedals--which recalls a previous arrangement. A selectable TRS stereo input allows use with stereo applications. The power is standard 9v. The unit's build quality is exceptional and rugged.

The Flint's sound is second to none. The tremolo sounds are very useable with the speed knob going to a lower threshold than other tremolo effects. Very mellow and pleasant. The harmonic trem was my favorite of the three for its unique flavor. I found the reverb to be no slouch, performing just as splendidly as Strymon's dedicated blue sky reverberator. The ability to configure an expression pedal with any specific control can lead to very interesting results.Having used the pedal through a variety of amps, I was pleased with the flints sound both in front of amps for a more mangled sound and in a given amp's loop as well.

The Strymon flint is another excellent, studio-quality offering from the brand. I have never been a fan of Tremolo effects, but the flint's capacity for subtlety charmed me, as well as it's over the top sound quality. The effect is competitively priced against other boutique tremolos alone, let alone for a two-in-one arrangement such as this. Awesome product.

Easy and awesome it delighted me ...

Very good stuff ... I do not think about me turn to another pedal ..

The battery is consumed in 3 hours ... transformer required (like most reverb for that matter).
It is true that the "mix" very driven beyond 12 will color a little more sound of the amp .. but it suits me anyway.
The tremolo section (comprehensive) is a smaller, but an effect of its own.

No noise even at high volume .. really clean.

freeguitar's review (This content has been automatically translated from French)" Fabulous"

Everything is so easy to share the secondary functions.
I did that for a few hours.

The effects are really perfect for me the quality is really great!
Flint adds a little grain that I love. This pedal really fills me!

Few hours.
I basically tried everything (TC electronic, DIGITECH HARDWIRE, MXR, BOSS etc .....)
I like everything, even the price does not deter me so I'm a fan of this pedal.
I would do this choice without hesitation

2 of 10 people found this review helpful

mr martinez's review (This content has been automatically translated from French)

Very easy to use, although I do not search ais advanced settings.
I plug rotates three button and it works perfect for me.

Level sound quality is top! I usually pedals, I spent a good amount and this one, I would keep! It is not quite neutral, it adds a slight grain that is really beautiful, I'm a fan.

The price is high but perfectly justified, nothing to do with Boss and MXR in my opinion, it is really a cut above. I remake this NIOHC without hesitation.

Did you find this review helpful?yesno
»
Read the 6 user reviews on the Strymon Flint »

See all 449 photos of Strymon Flint »

View all 4 videos of Strymon Flint »

Strymon Flint manuals and other files