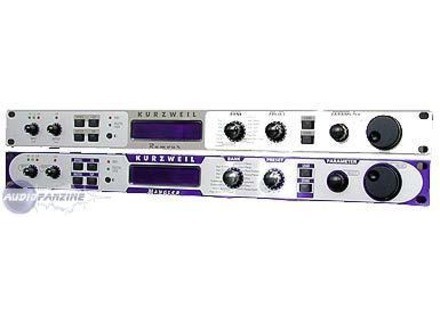 briank's review"Lush reverbs in a simple package for a song"

Analog connectivity is via 1/4" TRS. XLRs would have been a nice touch, but no biggie there. Analog output operating level is switchable between -10dBv and +4dBu at the back of the unit. RCA-type S/PDIF digital i/o is also available, as well as MIDI i/o and a jack for a pedal which I have never used.

The Rumour has a good variety of large and small room, hall and plate type reverbs separated into banks, as well a additional banks of gated/reverse/compressed verbs, "unusual" effects (examples: "acid trip room," "cabinet in room"), a Kurzweil party piece bank called "LazerVerb" which I find rather gimmicky and not often very useful, and banks of delays and delay/reverbs, choruses, and flagers. There are 192 presets in all. In addition, you can save your own edits in four banks of 16 each, which is a nice touch for recall or personal go-to presets, particularly as the unit will NOT save your edits when the power is switched off at the end of a session. You either save it or lose it.

The unit also has a 3-band digital EQ on the output which can be bypassed by a master bypass switch which will also allow you to bypass the effects, or both EQ and effects.

The presets are generally ok starting points which I always like to go in and edit/tweak. This is quick and easy to do thanks to a straightforward and simple parameter selection interface based mainly around a pleasant-feeling stepped rotary knob and a jogwheel.

It's a fairly intuitive unit to navigate, menus are straightforward and the display is easy to read. The settings can be edited fairly deeply, though if you prefer a simpler menu and don't want to go really deep with the editing, you can set the unit into a mode that shows fewer editing options. This is a nice touch to help the Rumour suit the tastes of a broader variety of users.

I will nitpick that the 3-segment LED input metering is completely insufficient. There is a yawning chasm of decibels between -48, -12, and "CLIP" which makes gain staging through the unit tricky. Fortunately, the output trim is a different story as its position in 0.5db increments is visible on the display.

Kurzweil includes a perfectly satisfactory, simple manual although users already familiar with other hardware rack effects should be fairly comfortable navigating the unit right away.

It's nice to have the other effects, but I mainly reach for the reverbs on this unit. The medium and longer/bigger rooms, halls and especially plates are very good. Extremely short reverbs can take on a bit of a metallic sound; the unit doesn't excel there though the bright, metallic character can be finessed a bit, but otherwise I would describe the sonic character of the Rumour as having a pleasant lush sparkle. The delays are also useful and tapping in a tempo is a piece of cake via a pushbutton that functions with an audible click.

The digital 3-band EQ works well enough but I prefer to EQ my reverbs on analog console channel returns, so it's not a feature I use very often.

The digital converter quality is quite decent and you can indeed leave the EQ and effects bypassed and use this unit as a stereo digital audio converter, which is a nice little trick. It's not ultimately neutral and refined as with high end audiophile quality converters, but certainly better than you'd expect in a mid-priced effects unit.

The Rumour excels at my most-used reverbs, has a number of addition effects for icing on the cake, and has a pleasantly colored, generally high quality sound sound that is unique compared to other brands I use such as Lexicon, Yamaha, TC Electronic. My few complaints about it are mainly aesthetic, though I would prefer it to be be a bit smoother with short reverbs.

The unit is well built and has never given my any trouble in some 7 years of routine use. The chassis is vented, it does give off a bit of head and it's a good idea to give it a bit of breathing room in the rack.

Kurzweil has discontinued the Rumour (and its class-mate, the Mangler), but still makes basic info and the manual available on its website. I considered it to be a very good value at its new price, and even moreso on the used market which will sadly now be the only option for purchase.

See all 11 photos of Kurzweil Rumour »