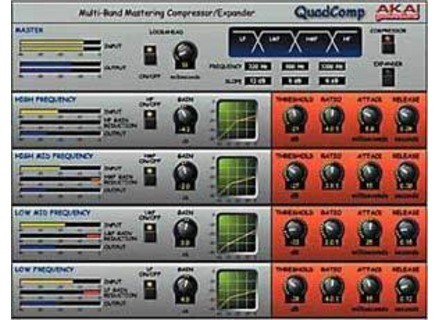 Akai Professional QuadComp
5
The Akai Quad Comp plug-in was quick to install on my computer and I haven’t had any installation problems since installing it. There were no compatibility issues with this software, either while I was running it on a PC or a Mac. The interface of Quad Comp is pretty easy to follow and easy to manipulate. You have four bands of compression that has gain, threshold, ratio, attack, and release parameters on each. The metering is quite helpful as well, as are the graphs. While it is marketed mostly as a mastering plug-in, I have used it for mixing as well. I don’t have a manual for Quad Comp so I don’t know how helpful it is, but the software is easy enough to figure out that you shouldn’t need it if you don’t have one.

I have run the Akai Quad Comp plug-in on two different machines. The one I am currently running it on is a Mac Book Pro that has a 2.2 Ghz Intel Core 2 Duo processor and 4 GB of RAM. I use the plug-in in Pro Tools LE 7.4 that I run with a Digi 002R audio interface. In the past, I have run Quad Comp on a Hewlett Packard Pavilion dv8000 lap top with a 3.0 Ghz processor and 2 GB of RAM. With the PC I was running Quad Comp with Cubase SX. Since it is a mastering piece of software, I found that you can’t really run too many of these at once if you want to use this for mixing. I could run two on the PC, and three on the Mac before it started to slow down my system.

I’ve been using the Akai Quad Comp compression plug-in for about three or four years and I have found it to be a great sounding compressor. I love how much control I have over the sound, which makes it great for both mixing and mastering. The only downfall is that you can’t run too many of these at once, as it takes up a lot of processing power. Beyond this, it sounds great and is easy to use, which is why I would definitely recommend giving this a try.
Did you find this review helpful?yesno
»