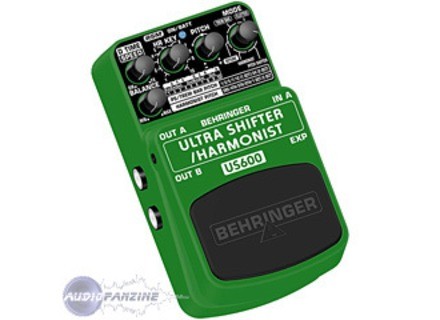 used for bass, use tremolo mode as a whammy,with bass distortion.

do not use any other modes besides tremolo, others not to effective on bass.

mac tilloy's review (This content has been automatically translated from French)

Behringer Ultra Shifter/Harmonist US600
1
Pitch shifter, harmonizer, boss pedal format, full of possible settings, tremolo arm effect "to take off" (to take off, for those who do not speak the language of albion ...)
"Rsm technology" or "real soundmodeling.réglage dry / wet, detune effect aussi.bref
very nice on paper, walking normally with a 9v battery or AC behringer not included, all for less than 50 euros, or 3 to 4 times less than other ...

So it's screwed, to put the battery already is fair game, be supported at the same time on two tabs with a ballpoint pen, to fold a spring, remove the cover and put the 9v battery, and if t ' supports not very strong, you make it and if not you press hard, the springs you jump in the face, like a devil's box ...
Finally you put the battery, new, you replace the cover, reséance of torture, and, and ... the LED does not light when you plug the guitar, the sound does not pass through the pedal, I change battery, jack, I check everything, nothing, nada, not work.
my new pedal behringer US600, I do not therefore "take off", so I will return it to the shop.
otherwise the document is in English, but anyway ...
ps: I of course tried with an adapter / power supply that meets the standards of the pedal
but nothing about the LED does not light when connecting the plug and nothing happens ...

...... No comment.
I said that I have also wha wha pedal from Behringer, the hell babe, I think, and, though not strong, functioning properly and has good value prix.je resentment had not particular to the respect of that brand, but a problem of power supply, a new pedal, even when it stuffs ....

1 of 17 people found this review helpful

Mr.viv's review (This content has been automatically translated from French)

Behringer Ultra Shifter/Harmonist US600
5
I post my review for the note back to this great pedal following the previous opinion was moderately relevant.
Becaufe it is not falling on a rare product that falls directly in the roads, he must kill him.
It is a very good price for his harmonizer
Several modes, but mainly I used the function harmonizer
I would put 7 because we can not select all intervals, for example

- 2 oc, oc -1, -1 Your -1 / 2 tone, 1.5Ton +, + 1 oc, oc + 2
I have not mentioned all the available intervals because I served mostly to those mentioned above,
Before purchasing, do like me, look at the instructions in French on the behringer site, everything is perfectly explained.

For my part I used it to double my guitar has the octave effect to give a 12-string, but also to tune my guitar a half step tones see below.
Other modes, I do not really use it, but the trem bar, giving a whammy effect, if properly exploited, can be simply awesome

The sound is very very true, we really feel that his guitar was taken cleanly re given in Eb, we feel just a very very slight lag, but that does not in any way to play.
As for the hamonizer in itself is a joy when his guitar has a double octave, for example, the sound does not bug when playing an agreement, unlike the harmonizer of my Line 6 M13.

I had to sell it with all my pedalboard to finance the purchase of a M13 today, compared with a harmonizer of the M13, there's no photo for a harmonizer to 50 € it's just the bomb, if you want one a low price, do not hesitate, despite the ASPEC plastic pedals, there's no reason they let you down, not until you jump in with both feet above
If it hurts you to put more than 100 € for a Pog .. Here is the solution.
10/10 for a great value for money!

Behringer Ultra Shifter/Harmonist US600
5
5 available effects:
Pitch-shifter
-Harmonizer
Detune-
Bend
-Flute (sort of tremolo)
The whole is, according to the instructions, digital.
Jack Connectors: 2 inputs, 2 outputs. Some effects can be measured by an external pedal.

The configuration is fairly simple, useful information is given on the box (on the front and top), the manual - light - is as supplied on the other hand in French, it must download on the manufacturer's website VF.
Anyway, the editing of various effects is very simple: you choose the effect on the right button is the dose with those on the left, we parmamètre with those in the middle.

The effects are very nice and are realistic about the range of reasonable use. As I play electric mandolin, up to 2 octaves makes the sound a little weird, but down to 2 makes a sound similar to the bass very useful. The bends can be useful if you use it down (which is not feasible in real life), otherwise, I prefer doing it by hand. The function can be used Fluter tremolo, but I do not use.
In use, Pitch Shifter, Detune and Harmonizer effects are most interesting.

I use it for 1 month, originally use it mainly for Octave, but now I use the detune all my tunes on Klezmer, and on a good harmonizer Part of the slow melody. In addition, just pitch shifter on some tunes very regular (real type) gives a nice color.
The Bend and tremolo have not yet found a use.
The value for money is simply awesome. The only flaw is that it eats batteries at a tremendous speed.
If it all over again, I do it again this election with eyes closed (but I'll take a PSU more)

See all 46 photos of Behringer Ultra Shifter/Harmonist US600 »

Behringer Ultra Shifter/Harmonist US600 manuals and other files