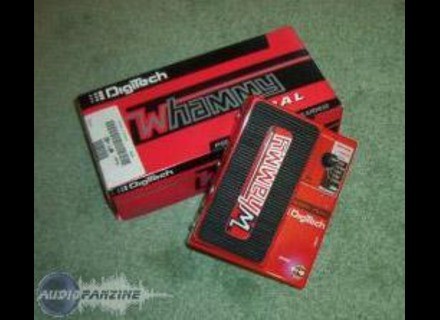 Whammy WH-1, Octaver/Harmonizer/Whammy from DigiTech in the Whammy series.

DigiTech Whammy WH-1
4
It's BRIGHT RED and somewhat heavy, with the standard expression pedal, on/off switch, and selector knob to choose between settings on the pedal. I've used it for about two and a half years now in various jazz, fusion, and rock groups. I've been playing bass for around 6 years now, and playing piano for close to 20. I only use this for bass, even though it's meant for guitar. I just left a band after our tour ended, and am working on a new electronica project called Shutterdown, based out of Pittsburgh.

I paid $200, which is a little too much for the unit, back in April of 2008. I really wish I had thought twice about getting one used or waiting for a sale. I bought it because I wanted the extra tricks that came with it in my pedalboard. I don't remember where I bought it, but it was somewhere between Wheeling and Morgantown, WV.

I like the massive array of selections, from a 2 octave sweep in either direction to harmonies, a dive bomb, a drop tune, or just plain detuning. Very cool stuff. I also especially appreciate the fact that it features a wet and a dry output so that I can keep a bassline rolling while adding the whammy effect for fun. It really is a pretty awesome sound. There's also a MIDI input for controlling the patch setting, which is incredibly helpful, because the knob is not good for controlling during a live show.

No way to control patch changes live without bending down to turn the knob or trusting your foot (not easy). No battery compartment; this thing only runs on wall wart power and nothing else, and the cord is rather short, so make sure you have either a powered pedalboard or a surge protector/extension cord if you go to use it live. Tones can be a bit clanky on bass, like getting pick noise. I definitely recommend blending wet and dry sounds at all times.

Shy of throwing it in a 2 1/2 ton wood splitter, I dare you to break it. Everything's perfectly sturdy.

Some very good things, and it has some fantastic bass uses, but the lack of battery compartment or an easy way to switch patches (seriously, just a little tap control would be fine) brings it down to a 4 instead of a 5. That is, along with the fact that you need to blend it to hold the low end when you turn this thing on with a bass.

DigiTech Whammy WH-1
5
I bought the pedal at Motor City Guitar. I found a $100 bill on the ground and went straight there, because the pedal is insane. I payed $100 for it, and it was well worth it because now they're selling for over $400.

It's the most insane usefull/useless pedal I have ever owned. The reason I love it so much is because with the right setup you can almost emulate a Moog synthesizer. It goes up 2 octaves and down 2 octaves, many different harmonies available, it can be used as an octave pedal also with some tricks up it's sleeves.

After years of use it doesn't like to completely go up or down to the full octaves sometimes, it's very hard to get a slow rising motion because it rarely ever goes fully up or down anymore. It's sounds like more of a personal problem i guess. I will take it in sometime soon to get it looked at. It also makes some funky noises sometimes, but I like that.

Very very sturdy, I think it would survive a nuclear blast. The only problem is the gripping rubber adhesive has worn down and gotten slippery, nothing more adhesive can't fix.

If you ever get a chance, at least play with it, I guarantee you that you will buy it. I haven't played the reissue yet, but I'm sure it will give you as much satisfaction.

DigiTech Whammy WH-1
The Digitech Whammy WH-1 Original is the first of its kind and for this reason is highly sought after.  The pedal is an analog one and has basic 1/4 inch connections.  It is powered by the power supply that comes with it and isn't rack mountable.

Using the Digitech Whammy WH-1 Original isn't hard at all as it is pretty basic in make up.  You simply have a foot controller and a knob to choose what interval you want to use.  You can choose everything from an octave up to 5ths and pretty much everything in between.  Beyond this there really isn't anything more to the pedal and after playing with it for a few minutes you should be able to figure out everything you need to know about the pedal.  For this reason a manual isn't necessary even though the manual for this pedal is put together well.

As far as whammy pedals go, the Digitech Whammy WH-1 Original is probably the best sounding one as the tone quality is outstanding.  The tracking is also great and I find it easy to control the pedal and get the sounds that I am looking to get.  I probably like using the single octave up the best as I find using two octaves up is kind of ear piercing and I usually don't have any use for the other intervals, although I can see why they would be cool to use as well.  Even though the other whammy pedals sound pretty great as well, it just seems as if they got it right on the first try and the WH-1 Original is the best.

I first used the Digitech Whammy WH-1 Original about five years ago and even though I now own a different version of this pedal, I would rather have this version as I think it is the best one.  Since it is the original whammy and a lot of people are looking for the original one, this pedal is pretty expensive if you can find it used - almost double of what you pay for the newer one.  I can't say that it is worth the difference in price, but if you are a collector or simply must have the original, I can pretty much guarantee that you will love this pedal.  However, if you are on a budget for the pedal I would probably recommend picking up the newest version as it will cost you much less.  All in all, the Digitech Whammy WH-1 Original is a classic pedal that every guitar player should witness.

Michaze's review (This content has been automatically translated from French)

DigiTech Whammy WH-1
5
Whammy WH-4 is the rdition the original whammy with MIDI implmentation and preset "dive bomb" and more (-3 octaves down). Construction is concrete, finally, more precisely in tle of hotel ... No need to jump on both feet, arsistera global rotates with Johnny.

Three major possibilities of families on this pedal:
<ul> The effect whammy: the note is played Pitche up or down with the pdaleL'harmonizer: the grade doubles the third, the fourth, fifth ... depending on the preset .dropoff window On the Contrle with pdaleLa Detune function: DDouble jouelgrement note for a chorus effect more or less marked depending on the position of the pedal. </ul>

Connectivity issue is simple: from scratch, from a MIDI sound output "dry" sound output "wets" and a power supply outlet. It is red Ferrari (a tape ...) and 12V adapter is included.

Easy setup: I preset my selects via the large rotary knob good, I mess with clicks the button and shoo ...

When I Reue, the stroke of the pedal was to the exponential type (little change in the beginning of the race and drastic change in limit switch). But, with a little manipulation of behind the fagots (see doc in English, one in franais as false), it recalibrates the beautiful and the race becomes very linear and progressive.

In short, it's easy. In simplicity is the "whawha + 1" ... We just regret not being able to change the preset foot.

GNRs sounds are either aggressive or singing, depending on the initial attack. In fact, unlike what one might think, even if the whammy is wad of electronics is very alive.

Presets "whammy" are those that are used 98%, the other will utiliss prcis in some cases.

For cons, the mastery of the beast excluded beginners: it must be comfortable on a solo and whawha which to draw something musical. The intRet is that we are surprised to very carefully the melody to score prcises notes, this is a very good exercise.

In conclusion, this is not an essential effect (except for absolute and exclusive fans of Tom Morello, including myself) but it "will seek happiness with Whammy" when one has some level. It opens a whole section of possibilities to explore.

There are several multi-effect "making whammy." Forget them all ... I have ever tried but shabby: a ringing bote tuna with an abominable latency.

One last thing. The whammy is used sparingly (it is the biggest difficulty actually) under penalty of prosecution with the drummer, bassist and singer ... (Oh heavy with his whammy ...)

Digitech Whammy WH-4, 310 Euros at Total-Music
Did you find this review helpful?yesno
»
Read the 7 user reviews on the DigiTech Whammy WH-1 »