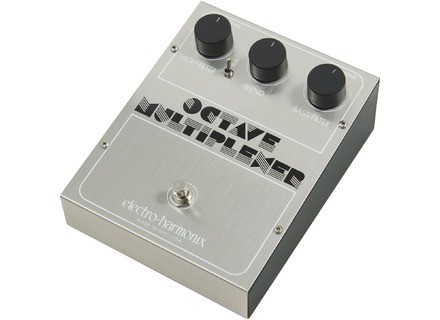 Balley Warson's review (This content has been automatically translated from French)

Electro-Harmonix Octave Multiplexer Reissue
3
An octave while analog is editable if you turn the knobs!
An input jack and an output that is also convenient to go on the amp or pedal next!
It's a big metal box of the first period EHX nano, it looks tough, it takes a crazy place on your pedalboard, I love, but it can be disturbing to some!

Three knobs, a switch has rarely seen more complicated!
I was not looking man (I have been paid) but knowing a little of those EHX, it must not be very big (yes it is not: https://www.ehx.com / assets / statements / octave-multiplexer.pdf or http://www.bassemporium.com/pdfs/EHOCTAVEMULTIPLEXER.pdf)
Beware there is no LED on this model, I found it is not really annoying because I only activated on some tracks, but in this case, permanently.
So it adds an octave below the note played
The three knobs:
High Bass Filter and Filter: it is used for carving the damn sub-octave!
Blend at a center that the sound mix dry and wet (not? if!).
The switch in the on position (high) active Bass Filter and in the opposite case the hight filter, I found it more logical to reverse but hey!.
Taking 9v boss style, but I do not know if it is original on mine (not me she hahem finally, a friend kindly lent me)!

Then the album!
And I must say I'm pretty pissed off, because if I had a blast has tried (for 3 h, 4 h alone or in groups) and I liked the effect in general, there is a big concern, a enormous same: a significant drop in the volume of the instrument.
The effect is purely ehxiens with this grain characteristic of the brand! In short it's dirty, there are some subtleties depending on the settings, but we must not hope to leave a clean, anyway it is not used to the house!
Another concern is the effect applied, but undoubtedly, due to the fact that I tried it with a bass, a Gibson Thunderbird with already a good start in its fat.
So on the low strings, E and A, must say that the sub-octave not sound masses (on a 5 string ...). on the other hand on strings no worries effect is present.
on the other hand with a Big Muff PI behind I found it terrible! All my worries of losing it was set low, a delight.

I have not tried so far only 3 or 4 o'clock, I have been loaned for the week.

I wanted to try to boost the bass of my Big Muff, and I must say it works pretty well. At first I thought putting them in a loop pedal to activate the power of a sudden one, or use the octave multiplexer alone on some tracks.
Only the volume concerns me a little cold, it must be solved by putting a boost behind, but it's still bad.
So I hesitate and I do not know if I'll take it (well the new version of XO, which costs in the 70 €, a price that seems reasonable)