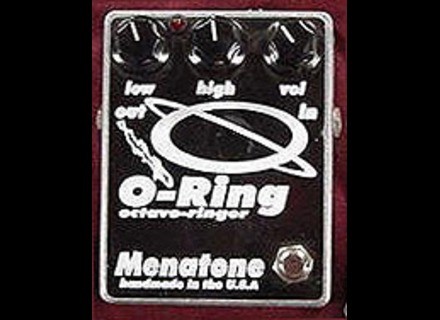 Menatone O-Ring
5
The Menatone O-Ring is a unique octave and fuzz pedal for electric guitar. However, it definitely gets sounds that are beyond what your normal octave or fuzz pedals will get you, sounding somewhere in between these effects and a ring modulator of sorts. The pedal is made up of analog parts and has a pretty standard make up with 1/4" connections for input and output and requiring power from a nine volt power supply. It isn't rack mountable since it's a foot pedal.

It's not hard to mess with the Menatone O-Ring since it only has three parameters. These include knobs for low and high octaves and volume, and that's it. While it's not hard to operate, these parameters aren't going to do exactly what you'll think they'll do since it's such a strange and unique pedal. I haven't seen a manual for O-Ring...

The Menatone O-Ring is one of the strangest pedals I've ever used. I don't own it, but a few months back I did a record at a studio that had it and got to mess with it for a bit. There were so many different pedals that I hadn't heard of at the studio that we decided to set the majority of them up and try them out. The O-Ring was definitely one of the weirdest of the bunch, but I have to say that it's pretty awesome. It definitely reminds me of the MXR Blue Box as I've seen it described, but can get stranger than that even. It's hard to explain the sound in words, but if you like out there effects a la ring modulation, you'll love the O-Ring.

I'm not really sure where you could buy a Menatone O-Ring since it seems pretty rare, but if you're into wild and crazy effects, it's something worth going after for sure. Since I've only seen the one of them that I've used, I don't know much backing information or what one of these would even cost. The bottom line with Menatone's O-Ring is that it's an awesome little pedal for getting some crazy sounds that will make your guitar sound like something out of this world...
Did you find this review helpful?yesno
»