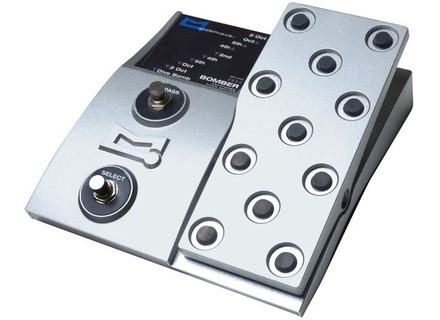 Morpheus Bomber
5
From the point of view of the construction is the pretty stuff, good sound and size is the same as the whammy has qq. prs mm (approx. 1-2cm wide). Regarding the look I like even if usually I prefer the vintage stuff. In any case it is in another GRADE compares the horrible news whammy DT.

The most interesting is when I branch in the loop of my LS-2 boss: Bomber in the loop A, nothing in the loop B (= B = bypass his dry) and LS-2 rgle to "mix A + B". We thus find the mode "harmonizer" sorely lacking this beautiful pedal. It can be more rgler the LS-2 level of dry signal and Dtun. The result is really stunning: Bomber with the + 1OCT audio becomes really very beautiful 12-string. Mode -1 octave we take for Jack White in the process of sent the riff for "blue orchid."

Regarding the sound the first thing to do is to properly rgler trim (gain knob of the pedal) to have a clear sound without buzz. The shifiting pitch is really very clean, almost crystalline (without effects). The agreements go down very well sup octave lower. to beyond one feels that began screw up but nothing serious (lightweight warble like the whammy). With the Bomber can play tuning 2, 4 or 7 semitones lowest Manire everything believable. Eg for C drop the low E is granted a tone lower and updated with the Bomber rgle to -2 semitones prsque ... It's too easy and sounds really tr s correctly. The bypass Bomber does not seem to eat the rest sound but this has yet to confirm.

I had the opportunity to test my Whammy IV ct. Now where will I keep ... For the moment I do not know anything yet because we must admit that the Whammy IV has its charm but I think the Bomber is far ahead in terms of sound quality, but the price of more possibilities limits. However the trick describes above I think it will take the advantage.
Did you find this review helpful?yesno
»

Morpheus Bomber
4
Whammy like polyphonic, two footswitches (On / Off and scrolling presets).
The case is metal and seems indestructible.
An IN and OUT, no direct output and no way to have more direct sound of the processed without a mixer-like boss LS-2, for example, or play two amps.

The configuration is very simple since there is a trick to checker: the input level knob, a good setting is very important to render, in my case I do not hesitate to to almost fully so go pretty hard in the pedal. The meter is not all the time in the red when I play but not far.

I put a big good point size and ergonomics of the case, it is of course a matter of taste but I found the perfect pedal stroke of expression and very intuitive. With a little practice you can easily get a clear note middle of the race, for example, the kind of stuff that I never got to do with a whammy.
The case is very flat and not too heavy nor too light. Here I stick a live 10 for general use, really well thought out.

So I'll be a little less "nice" Pierrot-le-wise at rendering.

Already, when the effect is switched on, pedal up, so without changing the pitch, there is a loss of frequencies AND latency, albeit small, but real.
I read everywhere that there is zero latency, it is totally false. This latency, although lower than a whammy is definitely there. It does not bother me to use as I do but he must know, it's not zero latency.

Regarding pitched sound, as has been said many times, the effect is much more natural than the whammy but the loss frequency which I have described above is that it can be tricky to use as a virtual capo. Even with a low pitching (+2 or -2) grain guitar / amp takes a hit in the wing, it can be very unbearable bearable for some as for others, you just need to know and test if possible before purchase if this is the first time you are targeting.

I have not noticed any drop or artifact and no matter the preset, the latency does not change.

I broke down because I had a octave / pitch shifter polyphonic and it is at this time (September 2013), sold off at several online retailers.

ebrian's review (This content has been automatically translated from French)" Good!"

Morpheus Bomber
4
In, out, level and VU meter façade.Livrée 12 volt transformer with its setting. Solid construction.
Switches: on and quick selection effects. Usb which is useless because there is nothing to download on the site taken.
Octave-3Oct (divebomb), 2OCT, 1oct, 5th, 4th, 2nd, 2 nd, 5 th, October 1, Oct. 2

This pedal colors her hair and has a small latency. Otherwise it is realistic, the divebomb is impressive. Interesting for vibrato but not recommended as capo because the sound is not quite natural. Attention to the gadget side and not too abused. The pedal travel is very accurate because as mentioned in previous reviews we can make changes like on a real vibrato but tune ...

Morpheus Bomber
5
From the perspective of the construction is the pretty stuff, though strong, is the same size as a whammy qq. millimeter (about 1-2cm wide). As for the look I like even though I usually prefer the vintage stuff. In any case it is in another class compared to the horrible news whammy DT.
Too bad we can not mix the dry with a detune for use as a harmonizer or octave as the Whammy ....

The most interesting is when I plugged in the loop of my Boss LS-2: A Bomber in the loop, nothing in the loop B (B = bypass = the dry) and LS-2 set to "mix A + B ". This produces the mode "harmonizer" which is sorely lacking in this great pedal. It can be also set on the LS-2 the dry signal level and Detune. The result is truly stunning: with the bomb on October 1 we get a 12 string sound really beautiful. -1 Octave mode we take for Jack White in the process of sent the riff of "Blue Orchid".

With regard to the sound the first thing to do is adjust the well trim (button input gain of the pedal) to get a clear, no buzz. The pitch is really very clean shifiting, almost crystalline (no effect). Agreements going very well until the lower and upper octave. BEYOND we feel that it starts to screw up but nothing serious (slight warble like the whammy). With the Bomber can play in tuning 2, 4 or 7 semitones down so entirely credible. C p.exe to drop the low E is given a tone lower on days with and Bomber set to -2 semitones ... It's almost too easy and it sounds really well. The bypass of the Bomber does not seem to eat but the sound It has yet to confirm.

I had the opportunity to test it next to my Whammy IV. Now why do I keep ... At the moment I do not know yet because we must admit that the Whammy IV has its charm but I think the bomb is far ahead in terms of sound quality but at a price of more limited possibilities. But with the trick described above I think it will take the lead.

See all 74 photos of Morpheus Bomber »

View all 3 videos of Morpheus Bomber »