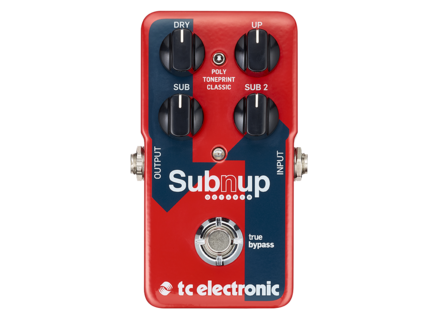 Sub 'N' Up Octaver is the latest addition to TC Electronic's line of game-changing TonePrint pedals. Announced as featuring an advanced octave engine, this pedal claims to offer everything from pristine polyphonic octaves to gritty old-school monophonic tones - right out of the box.

Sub 'N' Up features individual blend controls for dry, octave up and two sub-octaves, and is announced as able to deliver "flawless octave tones" on either complex chords or groovy single-note lines, while TonePrint and its built-in modulation algorithm opens up a world full of otherworldly octave tones never heard before.

Street price is announced at $129. More details at www.tcelectronic.com.