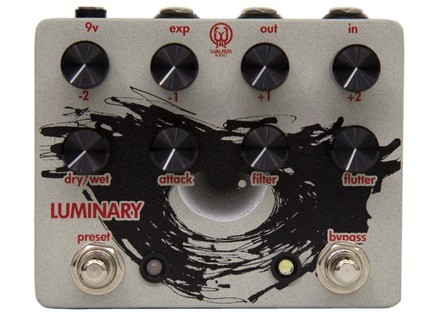 Walrus Audio's Luminary Quad Octave Generator stompbox allows to dial in any combination of four separate octaves including -2, -1, +1, and +2. It also features three onboard presets available for saving your go-to sounds as a well as live mode, resulting in the user being able to access up to four custom sounds at any moment.

The four knobs across the top of the pedal control the level of each octave. Controlwise, the Dry/Wet knob manages the ratio between the original and effected signals, Attack dictates how fast the octaves bloom after the initial attack, the Filter knob controls the cutoff of a low-pass filter on the octave signals and also increases an envelope type effect at higher settings, and the Flutter knob enables a chorus effect that can be applied to the octaves. The expression control allows the manipulation of any combination of these options to allow the user to customize the effectiveness of the Luminary: -1 and +1 octave volume, +1 octave volume, Attack, Flutter, and Dry/Wet.

The Walrus Audio Luminary Quad Octave Generator is announced at a U.S. MSRP of $319 and will start shipping next Monday, April 18th, 2016.

More details at the manufacturer's website, and in the following videos: