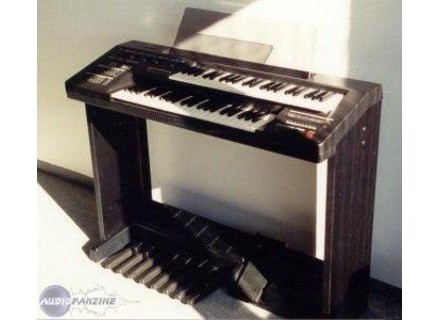 Electone ME50, Organ from Yamaha in the Electone series.

Since there is so much going on with the ME-50 , it did take me a little while of practice to understand what everything does on this organ.  There is endless tone control available and all sorts of effects at your disposal to insure that you will have total control over your sound.  Everything is laid out conveniently and because of this is helps you to figure out what everything does because if it wasn't smartly done it would be a mess.  I've never seen the manual for the ME-50 , but if you can get one or already have one it is definitely a good idea to have it around because there are a lot of ins and outs to this organ.

The tones that are possible with the ME-50 are quite diverse and varied and at the same time still share a common factor that make this organ what it is.  It is possible to get all sorts of organ sounds including traditional sounds and some not so traditional ones.  It is also great for getting some really quirky and almost circus like organ and keyboard sounds that are really interesting and fun to play around with.  Even though some of the sounds are a little too out there for my taste, for the most part this is a really cool sounding organ.

They are somewhat hard to find now since they are no longer being made, but if you are seriously seeking for one you can find one at a reasonable price.  The hardest part is finding a way to move this thing as it is extremely big and heavy!

GarinT's review (This content has been automatically translated from French)" Very vintage!"

Yamaha Electone ME50
3
What type of keyboard (synthesizer, piano ...)? How many octaves?
In fact, I have an ME30, the same as the ME50 with a few less buttons. It is therefore an organ, two keyboards / pedals.

How many sounds effects? What styles? Are they edited?
I did not count the sounds, there are four polyphonic directly accessible to the lower keyboard and four mono poly 4 for the upper keyboard. It also has a bank in a rotating menu (great invention!) Of twenty I think. The sounds are not editable, of course ...

What controllers (pitch, modulation, sustain ...)?
Well, a volume pedal on the right foot. The ME 50 had a little extra I think pedal to control the vibrato.

MIDI is finally the big advantage of this keyboard now. It was also dropping major when he had bought, like what, almost 30 years later, it was not wrong!
The three keyboards are each on a different MIDI channel (1, 2 and 3) and thus allow to control a lot of sounds simultaneously. We must of course be organist! Same with an organ VST (MIDI-> USB), it was perfect ergonomics of the organ, and with low latency is the foot.
on the other hand, weak if you will, but it is not the subject of an organ, not sensitivity and aftertouch. Everything comes at the same level, but not fully. It is an organ, so all or nothing.

The general configuration is it simple?
My faith is an organ. Nothing complicated for this model actually quite simple.

The sounds are original, so frankly next ... The interest of such an instrument is currently elsewhere (see above)

How long have you use it?
Nearly 30 years

Have you tried many other models before buying it?
I can not afford!

What is so special that you love the most, least?
Plus, the ergonomics and MIDI, the least sound, BAR ...

How would you rate the quality / price?
Given the age, hard to say. But considering the price in time, it can do a great master keyboard simple.

With experience, you do again this choice? ...
I heard the music on it, how to make a choice?!