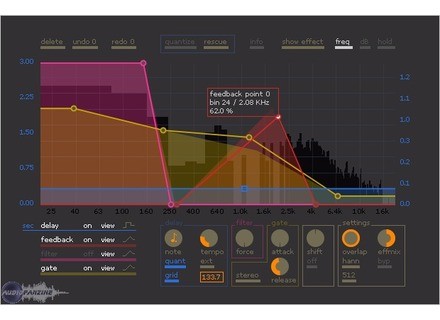 Obelisk, Other effects bundle or multi-effect from Artificial Audio.

Artificial Audio Obelisk
4
Very rarely do I have problems with software plugins these days. However, this is an older one I almost forgot about, and occasionally it will cause Logic 9 to crash. It has only happened 2 or 3 times, but annoying none the less. The manual is good as well as they offer videos which are better (for me a least). This plugin has a very complicated interface and can at times be a little hard to read/decipher as there are a lot of things going on. From an artistic viewpoint, I think the GUI is quite attractive but from a performance viewpoint, the colors and the massive amount of things that can be happening it can be a little bit of a pain. The colors make it a little hard to read (not too bad) and the complexity of the plugin might warrant a full screen version.

Again, I have experienced some crashes, and I mean complete crashes where Logic shuts down so it is always good advice to save frequently when using this. Okay, as for performance this plugin sounds really really good. The effects are great (especially the filters for digital) and the control you have over each effect is really good, especially the 2D Lfo's (that is kinda there trademark I guess). After getting use to this plugin you can craft some amazing effects that move and sparkle and do all sorts of fun tricks. It really comes in handy with mono synths as you can bring to life even the most dull and boring synth line you can make. I own a Roland D-110 and even though I enjoy the synth for its late 80's feel, it is a rather lifeless synth without effects. This plugin makes it sound like some amazing workstation that would cost a heck of a lot more than the synth and the plugin combined. Even the presets in this guy will blow you away. The graphical interface has some great usability because all the effects can be "drawn" using the grid in the top half of the plugin. Not only is it fun to "draw" your effects but its really fun to watch them move around.

What I like most about this plugin is it's fabulous sound and the fact that it is pure eye candy when you program some really cool "moving" effects. What I don't like is the fact that it will randomly crash. This could be something with my system, you never now, and it has happened only a handful of times, but after spending 20 minutes crafting a great sound, its a real kick in the head to lose everything you just did.
If the crashes get fixed, which I should check for an update because I haven't used this plugin in awhile because of that, this would be a phenomenal plugin for only $95. For precision and quality of the sound I give this two big thumbs up. I have used other multi effect pattern based plugins like Audio Damage's Automaton. I prefer this one graphically and control wise but the fear of a crash makes me reach for the Automaton more often. Would I make the same choice? Well, it's hard to say. I guess no, because of the crashes. If there is a fix though, a big YES!
Did you find this review helpful?yesno
»