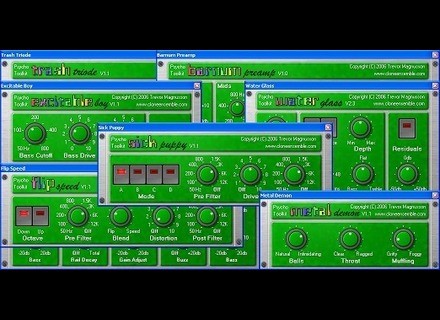 Psycho Toolkit, Other effects bundle or multi-effect from Clone Ensemble.

Clone Ensemble Psycho Toolkit
4
Clone Ensemble's Psycho Toolkit is a shareware collection of seven plug-ins, only available in Direct X and VST formats and only on Windows operating systems. It's not quite free but it only costs a small fee to get it all activated. I used to have this running on my old system but no longer have a compatible system to run it on. Included in the bundle are seven plug-ins in total, including Barnum Preamp, Excitable Boy, Flip Speed, Metal Demon, Sick Puppy, Trash Triode, and Water Glass. The names aren't exactly descriptive as to what they'll do, but the Barnum Preamp is kind of an analog saturator, Excitable Boy is an aural exciter, Flip Speed is an octave generator, Metal Demon is a vocal effect, Sick Puppy is a distortion, Trash Triod is an amp modeler, and Water Glass is noise reduction. As you can tell, this is a pretty versatile set of plug-ins as you can achieve all sorts of different effects here. I don't think there's a manual for this set, but the plug-ins are fairly easy to learn without one.

I used to run Clone Ensemble's Psycho Toolkit on my old system when I was running Cubase SX. I had Cubase running on a Hewlett Packard Pavilion dv8000 Notebook that had a 3.0 Ghz processor and 2 GB of RAM, which was enough for me to run these plug-ins pretty smoothly. Unfortunately not all interested parties will be able to enjoy these plug-ins since they have a limited compatibility, but I believe that those who can run it will probably be able to do so without any performance issues.

The Clone Ensemble Psycho Toolkit is a nice little collection of shareware plug-ins that are definitely worth investigating into for those who want some interesting plug-ins at a really cheap price. This is nearly free, as it only costs a small registration fee, although I believe you can get a limited version of these plug-ins for free. Some of the plug-ins in here are definitely more useful than others, but all do have a time and place. I'd say that they're all about the same quality, which isn't the best but isn't the worst. My favorite of the bunch would probably be the Excitable Boy for it's ease of use and the Flip Speed which is capable of some pretty crazy and cool sounds. If you have a compatible system (meaning a PC), I'd recommend checking out at least the demo of the Psycho Toolkit for sure.
Did you find this review helpful?yesno
»