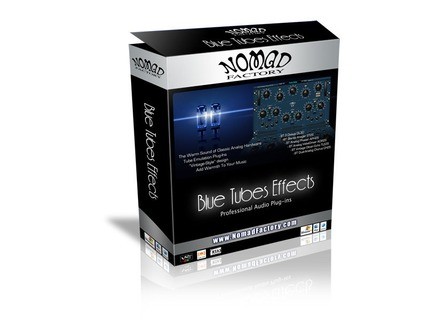 Nomad Factory Blue Tubes Effects Pack
5
The Nomad Factory Blue Tubes Effects Pack is a bundle of six plug-ins of various effects for your DAW. This is a great way to get some in depth plug-ins of some basic effects all in one place. I don't know the availability of these plug-ins as individuals, but it's definitely worth getting the bundle as a whole since I know with Nomad Factory in general you'll save a lot of money by buying the bundles rather than the individuals. Included in the Blue Tubes Effects Pack are BT Dual Analog Chorus CH-2S, BT Tempo Delay DL3D, BT Valve Driver ADR2S, BT Analog Phaser APH2S, BT Stereo Imager ST2S, and the BT Olican Echo TLE2S, so as you can tell the effects are pretty varying in nature. They all share similar looking and feeling interfaces, with varying degrees of control available in each. However, I've found all of them to be pretty easy to use more or less, although some have more going on than others. I don't know if a manual is necessary and I haven't seen it anyway so I can't really speak to it's make up.

I'm not an owner of the Nomad Factory Blue Tubes Effects Pack, but have used it at the studio where I work, as we've got it on all of our systems there, which are a bunch since we have a number of rooms on site. Our A room consists of Pro Tools HD and a MacPro desktop computer with 10 GB of RAM and dual 2.66 Ghz Intel Xeon processors, so it's suffice it to say we never have any issues running software and plug-ins within this set up. This bundle is definitely marketed to home studio owners, so I would think that most users at home would be able to handle the plug-ins as far as performance is concerned.

If you're looking for some bang for your buck when it comes to a bundle of various effects plug-ins for your DAW, the Nomad Factory Blue Tubes Effects Pack absolutely should be in the running. You aren't going to find many plug-in bundles in general for this price, let alone one with a good amount of versatility and an overall impressive sound quality. The plug-ins should stand up to most others of it's kind and it's definitely awesome to have all these different effects processors in one place. This BT Effects Pack is perfect for the home studio on a budget but is also great for professionals looking to beef up their sound palette in the way of some extra plug-ins...