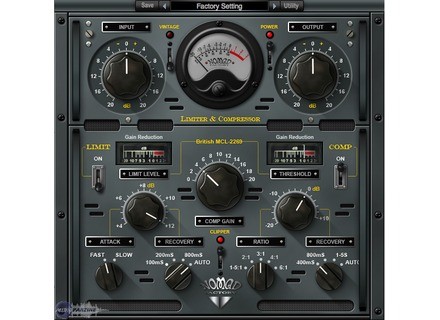 British Bundle, Other effects bundle or multi-effect from Nomad Factory.

Nomad Factory British Bundle
5
The Nomad Factory British Bundle is a package of two plug-ins - the NEQ-1972 equalizer and MCL-2269 compressor/limiter. Both are pretty cool plug-ins, as they're both capable of a lot. I don't own this bundle, as I've used it at the studio that I work at where they have pretty much all of the Nomad Factory plug-ins. For this reason I don't know what the installation process is like first hand, but it's most likely pretty straight forward as long as you've got proper compatibility happening. It's available for Mac and PC and in VST, RTAS, and AU formats, so this shouldn't be much of an issue anyway, but obviously double check before buying it. The interface of each of the plug-ins has a good amount going on, but it's really only helpful as it gives you option. Maybe it takes a minute or two longer to get used to, but in the end it's definitely nice to have more options than less. A manual might be helpful if you're new to signal processing, but I haven't seen it for myself.

We've got the Nomad Factory British Bundle running on a few different systems at the studio where I work, as we have a few different studios and a few mixing suites on site. The main room that we have contains a Mac Pro desk top computer with dual 2.66 Intel Xeon processors and 10 GB of RAM, all running with a Pro Tools HD system. We very rarely have performance issues since it's HD, but I could definitley see these taking up a decent amount of processing power in an LE type of system, so make sure that you have a pretty decent system before buying these.

Overall, I find both of the plug-ins in the Nomad Factory British Bundle to be very useful. They have pretty warm sounds and there is a lot that you can do with them since they're so flexible in their parameters. Check out my reviews on these plug-ins individually if you're looking for more in depth analysis, but for now suffice it to say that these have a lot to work with. Between just these two plug-ins, you'd have a pretty decent plug-in suite because of this versatility. I don't know how much this sounds like a British console, but it's definitely cool that it has the make up of one. The price makes these affordable for almost anyone, so definitely check out the bundle if you're looking to expand your plug-in suite.
Did you find this review helpful?yesno
»