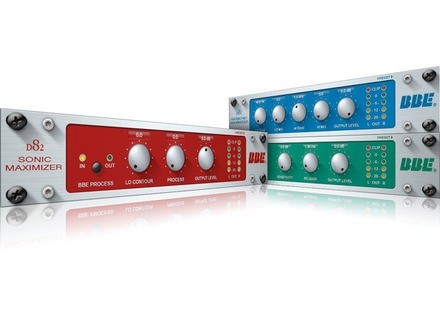 Nomad Factory BBE Sound Sonic Sweet
4
The BBE Sonic Sweet has been a part of my set up since 2010, it can be used as a VST with either Windows or MAC computers. It is a maximizer plug-in suite that has some audio enhancement plug-ins. It is very affordable costing less than 100 dollars and it is something that any engineer needs to have.

Installing it was quick and easy, it only takes a few minutes and it is very light on your CPU. I have run this over 5 times simultaneously and still have not had a issue with it freezing or crashing. I compare the BBE Sonic Sweet to Waves plug-ins a lot because they give you a similar sound. That is sort of the reason why I am not happy that I purchased the BBE Sonic Sweet, it is so much like the Waves plug-in bundle that I feel like I wasted my money. It was a good thing it was only 100 dollars.

I love using the BBE Sonic Sweet on my drum tracks though, if you need to get your snares and kicks to cut through your mix and have some pop to them then the BBE Sonic Sweet will take care of that easily with just a preset you will notice how much of a difference it makes. I sometimes have difficulty getting my snares to pop and cut through the mix but the Sonic Sweet does it for me now.

If you really spend the time to understand the BBE Sonic Sweet you will be able to get great sounds with it. It won’t happen quickly and it will take some experimenting but once you get it down you can find some things that you will love and find yourself using very often in a lot of your tracks. This is one of those programs that every time you use it you will fall more in love with it.

Nomad Factory BBE Sound Sonic Sweet
4
The BBE Sonic Suite is a bundle of software that contains three types of plug-ins.  It comes with the D82 Sonic Maximizer, L82 Loudness Maximizer, and the H82 Harmonic Maximizer.  It was easy to install the bundle as you can install each of them at the same time and it only takes a few minutes.  Each plug-in is easy to follow in terms of the interface of the software, as the sonic maximizer and the loudness maximizer has just three knobs and the harmonic maximizer has five.  I didn't take me too long to get accustomed to plug-ins and to get a grasp on all of the parameters.  I didn't need to look at the manual for the BBE Sonic Suite so I can't say if it would be helpful or not.

Each of the plug-ins in the BBE Sonic Suite has run smoothly for me whenever I have tried to use it.  I have run the plug-ins on a Pro Tools HD system with an Apple G5 computer and even though I usually only run two or three of them at once (if at all) and I've never had any problems within this configuration.  I don't use these all that often and while it would of course vary from system to system, I don't think that anyone with a decent will have much trouble running the plug-ins.

I've been using the BBE Sonic Suite for about a year and it is definitely a serviceable bundle of plug-ins.  I'm not the biggest fan of their sound and I think that the D82 Sonic Maximizer is the best of the bunch, but they can come in handy in certain situations and can do some things that other plug-ins cannot within a single bundle.  The price is a nice aspect of this bundle as you save money for the three plug-ins.  These aren't my favorite plug-ins the world and I do use them sparingly, they are nice to have around.  If you are looking for a good group of plug-ins at a cheap price, definitely try these out.

Kal's review (This content has been automatically translated from French)" Practical but limited."

Nomad Factory BBE Sound Sonic Sweet
3
The sonic is a sweet bundle of plug-ins including BBE D82 software version of the famous sonic stomp of the brand, along with an exciting harmonic "Harmonic maximizer" and a limit "loudness maximizer".

The installation was no problem activating the sit too.

I have not read the manual but these plug-ins are very simple and intuitive.

No stability problems and plugs are wasteful.

I use it for 2 months, I made a comparison with other plugs (among others in waves) with a freeware Exciter in Antress works as well (but took me some crash issues).

The price and appearance of Fame sonic maximizer convinced me to buy this suite.

The main interest of this result is the Sonic Maximizer, the process is rather vague (BBE proclaims that this system realign the phase of the bass and treble that HP would be difficult to reproduce). Short BBE is not very specific about what it really does to your signal: its application can revive tristounettes tracks a little, it adds a little punch and seems to dig the sound.

This effect, however, is used sparingly, otherwise end up with an aggressive mix and missing pretty mediums.

The harmonic maximizer sometimes helps out (rendering is similar to the "Renaissance" from Waves I alternately uses 2, sometimes one works better, sometimes the other ...).

I never use the loudness maximizer may be wrong, but having not bad solutions compressor / limiter (Waves L1 and C1, Vintage Channel, ProChannel ...) I quickly get the result I want with those above.

In the end a sequence that seems a bit busy, with a best-seller whose reputation is second to none, and 2 plugs that appear there to justify the price of the suite.

The price is right (about 100 euros), personally I find it hard to do without the D82 and I do not regret this investment.

I only put 7 because the interest is a bit limited, so BBE (finally Nomad factory rather that publishes these softs) had put two plugs in other really interesting result would be a very good deal.

Published on 04/30/09
BBE Sound have announced that, in cooperation with Digidesign, they will release BBE Sonic Suite, a collection of RTAS and AudioSuite plug-ins designed to replicate BBE's rack gear.