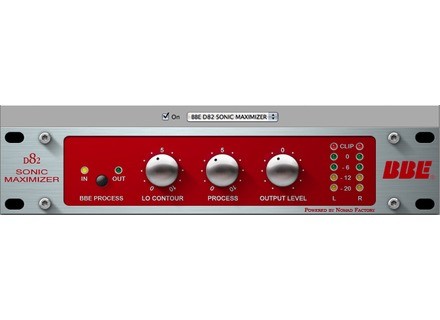 BBE D82 Sonic Maximizer
4
The BBE D82 is one of the plug-ins that comes free with Pro Tools. I had no problems installing it as it is automatically installed when you install Pro Tools. The configuration is simple - the same as a hardware 1176 and is easy to learn what does what. I've never had access to a manual for this, I'm not even sure if one exists and anyone with any experience with a hardware D82, or really any compressor for that matter, they will figure out how to use it.

I am running the BBE D82 on my Mac Book Pro with a 2.2 Ghz processor and 4 GB of ram and I am running Pro Tools with a Digi 002R. This plug in works fine with my computer as I've never had a problem running this plug-in. I get good performance from this plug-in and can run a bunch of them at once, however I think this has more to do with my machine than the make up of the plug-in itself.

I've been using BBE D82 for as long as I've had Pro Tools, which has been about 5 years. Overall, this isn't one of the best sounding compression plug-ins that I have used. It ends up sounding a little more transparent than full and I have other compression plug-ins such as Smack or the Fairchild 660 that I like much more than this. I do like this compression in some situations on electric guitar. Its pretty cheap if you have pro tools and purchased it from a place that offers discounts, it is clearly a bargain and it nice to have in your plug-in platelet even if it isn't the best sounding. Don't get me wrong though, it is a usable plug-in and I am glad to have it, but compared to some other plug-ins I have bought this just doesn't hold up.

I am currently running the BBE D82 Sonic Maximizer on a Mac Book Pro that has a 2.2 Ghz Intel Core 2 Duo processor and 4 GB of RAM.  I use the plug-in in Pro Tools LE 7.4 that runs with a Digi 002R audio interface.  Although I don't use the plug-in all that often, I have used both this version of the plug-in and another one so I do have a good amount of experience with BBE Sonic Maximizer plug-ins.  Within my set up, the plug-in works pretty flawlessly if you use only a few of them as the plug-in won't take up much processing power at all.  Even if you wanted to run a lot of them at a time you shouldn't have a problem if you have an adequate machine, but it really depends on what type of system you are running it on.

I've been using the BBE D82 Sonic Maximizer for only a short while as this is the newest version of the plug-in.  I've been quite satisfied with the plug-in since I started using it even though I only use it every once in a while.  It works great for adding a little punch to your sound, but I try not to use it too much as I find that you can suck the mids out of a sound if you use it too often.  The price isn't too bad at all and once you have it you won't ever need another plug-in like this as this will do the job.  All in all, this is a nice little plug-in that is cool to have, but is by no means essential to any recording set up.

BBE D82 Sonic Maximizer
5
The BBE Sonic Maximizer plug-in was a breeze to install, as I had no compatibility issues with my configuration at all. Overall, it was a quick process without any issues at all. The interface of the plug-in is extremely easy to follow, as it just has three knobs - one for lo contour, one for process, and one for output level. It also has an in/out button (bypass), and has a meter on the right. I don't have a manual for this, but it is very easy to use and you shouldn't need a manual if you don't have one.

I am running the BBE Sonic Maximizer plug-in on a Mac Book Pro that has a 2.2 Ghz Intel Core 2 Duo processor and 4 GB of RAM. I run the plug-in both in Cubase SX and Pro Tools LE 7.4, with a Digi 002R audio interface. I haven't had a problem running a few of these at once with this configuration, and it always runs pretty smoothly for me. While I don't think I have ever used more than three of these at once, I have never had a need to, so it suits my needs great.

I've been using the BBE Sonic Maximizer plug-in for about four years and have found this exciter plug-in to helpful in a number of different settings. I usually use this to add a bit of brilliance to sounds that sound dull. I have used it on both electric and acoustic guitars, as well as some vocals. The ease of use makes it a quick process to get the sounds you want from it, and the price is extremely cheap. This low price tag makes it great for home studio and professional studio owners. It will only cost $100 USD and to me it is worth it because I use this fairly often. While it is not a necessity for your plug-in suite, it is nice to have in my arsenal when I need it.

lymo's review (This content has been automatically translated from French)" Yesh, ouaif, why not ..."

I do not know if I should recommend this product. The world offers so many alternatives plugins
all more expensive one than the other ... If you want to remix one of the 80 tube and give it a big potato in 3 seconds, this plug is good. My only advice is: always try a plugin on your prods to see if it suits you, and it really adds something substantial to your mixes. BBE plugins are not essential for me, and in all cases and the more I use H82 (harmonic maximizer) the D82.

Did you find this review helpful?yesno
»
Read the 6 user reviews on the BBE D82 Sonic Maximizer »

Published on 02/06/08
BBE announces the release of the all-new D82 Sonic Maximizer Plugin.