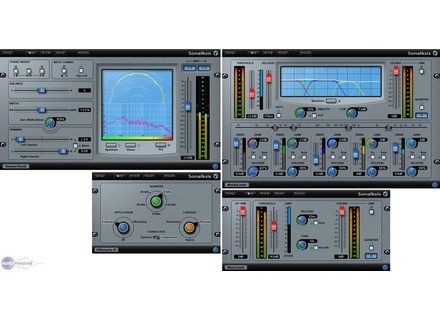 Mastering Suite, Other effects bundle or multi-effect from Sonalksis.

Sonalksis Mastering Suite
5
The Sonalksis Mastering Suite is a plug-in bundle of four high quality mastering plug-ins. It's not meant for pro mixing or mastering engineers, but rather for those who are working at home and are looking for some good tools to do a home mastering job. Included in this bundle are MultiLimit, a multiband limiter, MaxLimit, a loudness maximizing plug-in, Ultimate-D, an in depth dithering tool, and Stereo Tools which is for expanding your stereo spread and playing with tricks on that end of the spectrum. The bundle is available for both Mac and PC operating systems and in RTAS, VST, and AU plug-in formats. The plugs in general are pretty easy to use but this doesn't limit their ability as there is a lot you can do with them. I haven't seen the manual for any of these plug-ins or the bundle as a whole, but I'm sure you can get one if desired.

While I don't own the Sonalksis Mastering Suite or any of the plug-in individually, I've used each of the plug-ins at a studio that I'm often working from. It's a Pro Tools HD system, so running these hasn't been much of an issue. I've used these to print a bunch of mixes as reference and they're all smooth running. You do need a somewhat powerful system to run these plug-ins, but anyone who has a Pro Tools or another DAW running smoothly with plug-ins already, should be just fine.

Although there are a lot of different mastering plug-in bundles out there these days, the Sonalksis Mastering Suite holds it's own. The four plug-ins in here are great for a variety of uses, especially the multiband limiter which is very versatile, and also the dithering plug-in which is one of the most in depth of it's kind that I've seen. I'd recommend going for the whole bundle if you're interested or already like one of these these plug-ins, as it's a good discount for the bundle and you'll find all of the plug-ins useful in the end for home mastering. I'd also recommend checking out the T-Racks Mastering Suite, but Sonalksis' Mastering Suite is worth the time to check out as well!