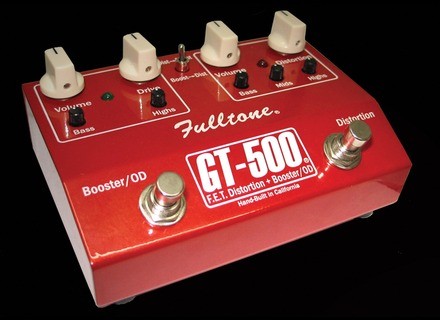 Fulltone GT-500
4
This is one cool sounding pedal. It is a distortion box and a booster pedal all in one. This pedal features a boost on the left and a distortion on the right. However, you don't have to keep them there. There is a mini switch that can allow you to change the sequence or arrangement of which unit comes first in the signal chain. I have never seen a pedal be able to do that before this one. A great idea which gives the user so many more tonal options.

The thing is pretty self explanatory. Each side has a Volume and drive control knob. One side says distortion, but it is the same idea. Underneath that you will find on the left side a mini knob called highs and another one called bass. Self explanatory as to what these two controls do. Underneath the distortion side there are three EQing control knobs labeled bass, mids, and highs and you can guess what they do.

This pedal sounds best with the gain and drive controls turned all the way up. At least this is my favorite setting. The volume doesn't make a difference since i would run it unity anyway. The EQing is just personal preference on your guitars and amps. So there really isn't much to say here other than try it with any guitar and any amp and it sounds very good. It has a chewy thick crunch to it when you turn the gain all the way up. I personally like running the boost in front of the distortion side as I think it adds more thick saturation. The other way sounds a little louder in volume to me.

This is a very highly used pedal from Fulltone. A great versatile pedal that is capable of some heavy distortion grind and boosting options. At new these units come in at a round $170. Not a bad price for two pedals in one.

I would recommend this pedal to anyone who needs a solid overdrive pedal and boost function in one unit. The thing will take up some space on your pedal board so be aware of that.
Did you find this review helpful?yesno
»

The Fulltone GT-500 pedal is split up into two different sections.  Since it is both a distortion and booster in one, it has the two split into different sections.  The booster section has parameters for volume and drive, along with buttons for highs and bass control.  The distortion part of the pedal has knobs for volume and distortion and three buttons for bass, mids, and highs.  Another really cool parameter that the pedal has is the ability to choose which way you want to route the different effects.  You can either have the booster or the distortion in front, which is really cool as it really makes the pedal two in one.  I've never seen the manual for the GT-500 so I can't say anything about how it is put together.

The Fulltone GT-500 comes in two different models - one is FET based and one is not I believe.  The one that I have used is the red, FET based pedal.  Both the distortion and the booster sound like top notch pedals on their own, so combining the two makes for a killer pedal.  I've used the pedal with a Fender Stratocaster and a '76 Fender Twin Reverb, which for me seems like the the perfect combination for a pedal of this type as the distortion and booster are both very transparent sounding.  I love distortion that is dirty but still has some clean aspects where you can still hear everything perfectly, which is exactly the type of sound that you get from the GT-500...

Since the Fulltone GT-500 is really like two pedals in one, it does have the price tag to go along with this.  However, it is still a reasonable price considering how well made this pedal is and how great it sounds.  I love having both a high quality booster and distortion all in one, and they have really made it so it has the feel of two separate pedals.  The distortion sound probably isn't for everyone, but for me the Fulltone GT-500 provides exactly the type of distortion/overdrive sound that I look for.

jesuswasapunk's review (This content has been automatically translated from French)

-We have a sound directly and Fulltone it was good.
The Canadian OD looks like OCD, and then with a treble boost can go up the van halen on the channel distortion.
-Used with a Gibson Les Paul is the foot.

From 3 months-Utils
"I ia esseay almost every home Fulltone OD including three versions of OCD.
I think it's the most versatile pedals and having the largest range of sounds.
Still without coloring the sound, and respecting the grain of the amp.
The new price high but justification ets e tpuis Fulltone is ....

Other Fulltone other guitar saturation effects