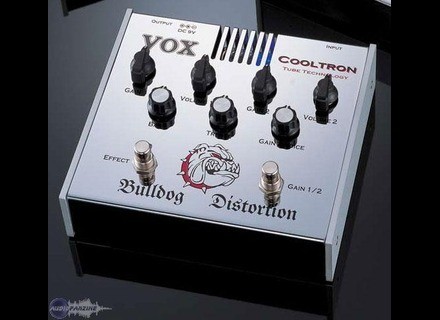 Bulldog Distortion, Other guitar saturation effect from Vox in the Cooltron series.

fonzyc's review (This content has been automatically translated from French)

Vox Bulldog Distortion
Happy purchaser of this pedal, I wanted to know if other users have the same concerns that rencontrs moi.A whenever j footswitch activates the left I have a huge loud click that sounds especially in amp when I play with humbucking pickups. Is this normal? My dealer told me that was doing it on other models but m'tonne lot for a pedal that price l. I expect from you, thank you ...

jellyboy74's review (This content has been automatically translated from French)" Excelolent"

Vox Bulldog Distortion
5
Everything has been said in various opinions

It's a good size pedal, lamp, very strong and very well made.

The pedal is very simple, a clean channel, a two-channel distortion, one another ultrgain oD (1 and 2) With Level indy settings, low AQ, acute and voicing. That answers the finger to the eye and easily find all the desired sounds. You can really attack all styles.

The heart of the beast! Both say you really feel the influence of the lamp that gives this particular grain. And both say that I feel the difference since I use a transistor head.

It's simple we just explore all styles without problems and work sound as desired. From blues to metal "clean" I really get a lot of satisfaction, especially with my Gibson Les Paul but I would be curious to see her marriage with EMG.

No matter the settings the sound is for me between a Marshall JCM 2000 Crate and Voodoo, AA fact Laney edges. (Bitish what).

In short when I think of Boss pedals and company type, they can go get dressed with their shit without personality or warmth.

Everything has been said about the opinions disputes, I think this pedal unanimous.

Vox Bulldog Distortion
4
purchased for the lamp I have customized the mieen, let me explain, I joined a mini power amp electro harmonics dedant (yes) returned to shoehorn it is true, keeping only the circuit board to win instead of the blow forced the décaller 2 footswitch to the edge of the short inscrition bulldog distortion:
result I have a head at the foot of amp / laptop and it repeats sending gas.
I will add a delay Boss DD 3 has the aveinir and voila, it is seen encorte space.
Sometimes I think I'm awesome, shit ankles! !

compliké not, we turn, we seek we find.

sending it well but channel 2 should reduce if not a bit too sharp but crillard lets out in the mix.
The first channel is really nice crunch.
It there's one thing above all: with single or double bin and it's different and especially you sculpt the sound volume with your guitar (like eddy van halen: 1 Mic / 1 volume of his guitars for 10 years and here)
I looked on youtube tests of this pedal: guys sometimes say that it has not enough gain, you look at what they play, fender single coil, the joke, you put in front of a gibson or ibanez for my part RGR 08 LTD / seymour duncan active ben there your gain! ! !
my setup has not yet caught fire, I am satisfied.
Many things tried before: TN SS 20: same as well but expensive Cygnus / blackstar ht dual / dist X: compressed but not too bad when meme
Metal Box off: expensive but it sent

Alpha007's review (This content has been automatically translated from French)

So much for those who would not have read before!

This is how even fairly simple, you rule and you branch you play, the buttons s'ultilise like any good amp with a footswitch (they make me even penss those marshall amp)!
For the edition of the sounds, it's pretty convincing!
The manual on him RAS!

A two possde know what channel (OD1 and OD2), when the channel is switched to a sound dj trs trs well and crunchy, the sound is bright and slamming, trs hot ( thank you the lamp) and dj is the bulldog without the agressivit when you turn the gain knob then losrque I put the second channel (Powwwaaaaaa) vl is the slap that I mang the sound is really great just what we can expect to play anything that makes mchant, I use an ibanez saber with a 15W amplifier and dj sounds good trs (I hate to be on the biggest amp), if you want big sound it is made for you!
In addition there are gain knob and completely independant volume which is back with two pedals in one (or a boost in addition to playing on the volume).

I have not had time to exploit it thoroughly, but I try before I buy a lot of pedals to Ditsö (I play punk / hardcore metal). The sound of the MT-2 or other ubber-metal, seemed dry and cold (a trs electronic sounds) than this one, it is certainly more expensive, but I do not regret my purchase, knowing that that is an excellent qualitprix for what it is!

Other Vox other guitar saturation effects