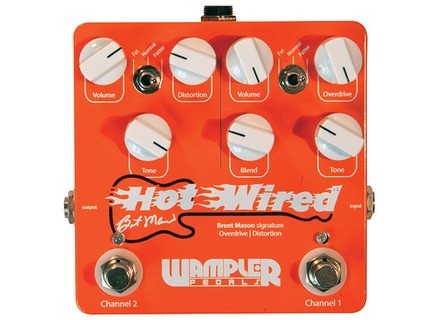 All his very effective knobs that gives a lot of choices, you can find it complicated, I find it convenient and simple, although it will handle all the knobs to test all possibilities ... but, hey everyone his sound in his head and one quickly sees to it or go with each knob.
There I put only 9 because I would have liked to have at least one contact to the foot to move from normal fat or fat to fatter overall on the pedal, it would have been more easy to move from micro to Winding Humbucker, or even on my Les Paul neck pickup to the bridge pickup. I found some solutions but it would have been a plus!

Wide range of crunch and possible saturations. I would say rather own the slight crunch to the very big sound but not greasy, for here it will take the amp or another pedal do it from behind.
9 For lack sound filthy.

Amp on Kosh Twintone: Either I play clean on the amp and I just switches the overdrive for solo cruncher and increase the volume a bit, or I play in crunch with overdrive and I boost the saturation solo well Rock with the left side over the overdrive and there hello big sound and harmonics coming out by themselves! Nothing but happiness!
I was afraid of not having enough boost to go out solo, but then there is the rab, I totally half stroke volume knob aside, I think it will be enough even in the group, even with of hardos!
Besides all the knobs have the reserve, no need to push.
Second, I hesitated with "Dual Fusion", which seemed to have a darker sound (thicker in the bass), but in fact with the tone plus the 2 switches (normal / fat / fatter) settings are obtained q'on tone as it wants.
I'll have the test group conditions (I am a poor lonesome guitarist who plays in group 4 or 5 times a year, because of work and taking away musicos pals), but a priori it is THE pedal that 'I needed!
Just a pity they did not think to put a FAT / global setting Fatter by two footswitches! Anyway after that would have given a cumbersome pedal.
Second test:
On 12 R amp Laney cub that's fine too, Laney is typed Blues grainier original, even in the clear. Here we gain a little grain we losing in clean son.Donc to taste can be varied with the amp behind it.

Compared to my OD Custom Sreamer Techniguitare the Hotwired is smoother it within the bluesy Custom Screamer grain. I will keep both, especially that activating the OD + the distortion of the Hotwired AND DO Custom Screamer I sound bodybuilder to Van Hallen, but then luckily I now have my MS2 as BOSS noise gate, if I play amid mistral!
So great pedal 2 in 1, but very different (complementary) of my CS Techniguitare I love for many years!

In total I have many of his foot:
- OD = HW single crunch (Country / Blues)
- OD CS + alone = crunch biting (Blues + visceral))
- HW = Disto oilier saturation (Rock).
- OD + Disto HW = saturation very Hard + + thick and biting
- OD OD HW + CS = saturation biting well for the Blues muscular
- OD OD + Disto HW + CS = The sound of death that kills (Van Hallen Eruption intro)
Knowing that it's only pre-selected sounds that I recall in the foot, because there is so much potential that everyone can find in (or take) his foot settings!