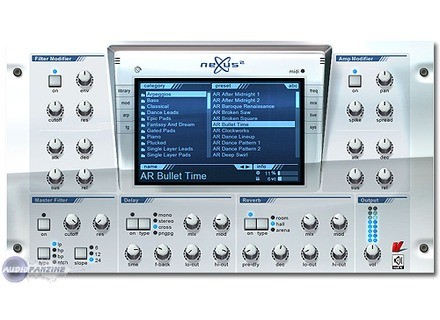 Nexus 2, Other Virtual Synth from reFX.

reFX Nexus 2
4
Nexus is a rompler which has a lot of clean sounds, most usable within dance and electronic music. It has a variety of patches ranging from pads, pianos, basses, horns and orchestral sounds, arpeggios and various other sounds. The basic edition with no expansion packs included costs $299. The complete package costs a hefty $3,539. The quality of the sound backs is brilliant. All the sounds are clean; if you run it through a spectrum analyzer you'll see that each sound is shaped really well which makes fitting the sound into a mix quite easy.

I first got it when I saw a demo song on YouTube and was impressed with the clarity and fatness of the sounds. My main aim was to use it in my dance music productions but I've ended up using it more in my hip hop beats. There are expansion packs for adding on extra sounds, which cost an extra $40 - $65 per pack.

It runs on both Mac and PC and can be installed as a VST, AU, AAX or RTAS plugin. Installation of the plugin is straight-forward. Once installed it takes up roughly 5GB on your hard drive and it requires a minimum of 2GB RAM to run smoothly. I have 4GB RAM on my current machine so that's not an issue. However, my previous laptop which had 2GB RAM used to take quite a number of seconds for the plugin to load and running several instances of it would slow down my PC, so you need to have a decent amount of RAM to run this smoothly. The full installation with all the expansion packs requires roughly 50GB. The package also comes with a USB eLicense dongle, so you need an extra USB port on your machine.

It should be able to run in most DAWs. I use it mainly in FL Studio and occasionally in other hosts but in 3 years of using Nexus I haven't experienced any crashes caused by it in FL Studio (my main DAW) which is a testimony of the plugin's stability. One of the things I like about the plugin are the onboard effects. The delay, reverb, etc is very good. There is usually no need to add any extra effects to the sounds which saves CPU and editing time (for adding and tweaking effects).

I think its strongest point is the quality of the sounds. There is very little to no editing required for you to make the presets sound good which saves a lot of time, especially in the mixing phase. A discouraging factor is the price of the full package. $3,539 is a big price to pay for a semi-professional/home user like me. For professionals who make a lot of income this may not be an issue. If the price is too high you may consider getting other romplers for less like Wusik station, Alchemy, Sampletank and Yellow Tools Independence; most of which have free versions. Another great alternative is Native Instruments Kontakt. Kontakt Player Free which is also a free alternative which comes with some pretty neat sounds and with enough scouring through the net you can find a tonne of free libraries.

It's best to listen to demo sounds to get a taste of whether it will suit your needs because once you buy it you can't create custom sounds. So if you're a sound designer you should not even consider getting Nexus. But if you are a dance music producer and want to get clean sounds that will allow you to make music instantly without tweaking too many knobs and a lot of clean-up work then Nexus may be the plugin for you. Given a chance to buy it again I would but after quite a bit of consideration, because the price is quite high. However, the quality of the sounds justifies to a great extent the reason for the price.

Cons:
- The presets are not customizable
- The price of the full edition is steep. You can get similar, more customizable plugins for much less
- You can't load your own samples or create your own patches easily

reFX Nexus 2
4
Nexus 2 offers crisp, golden sounds - and a wide variety of them if you buy the expansions! The sounds sound killer right out of the box, particularly for electronic music composition. I particularly enjoyed the Platinum Orchestra Hit setting, the arps and the gates. Nexus has strength in these realms, as well as Sawtooth and Square Wave sounds. Expect chunky electronic basses and crisp dance leads.

Running 8 simultaneous arps proved no issue for my computer. Again, I stress you keep your hardware cleaned (clear the fans of dust) and OS optimized for music production. Otherwise you might experience CPU spikes whilst using simultaneous plugins in your DAW.

The best part of Nexus is it's ease of use. Instead of customizing patches for each layer of your track, this is ready to go and sounds great! The problem is, an educated musical ear can EASILY distinguish Nexus out in a song - example, Lonely Island's "Jack Sparrow" - and the customization of presets is rather abysmal. You're pretty much a slave to existing presets, which some producers my find sacrilegious. But John Carpenter and Vangelis used presets all the time, and they gotta know SOMETHING, right? Nexus, overall, is a useful tool, particularly in dance genres. But don't let it become the staple of your sound or go-to crutch....use it supplementally and it can be a very useful tool.
Did you find this review helpful?yesno
»

reFX Nexus 2
Nexus by reFX is compatible with Windows xp , 7 , Vista and MAC.

The manual is great , provides great valuable information to give the user a direction to take and use the features that come with the software.

The general configuration is fairly simple , no additional tasks required , it should take just a couple of minutes.

The typical functions are well managed , the design is very simple and you get a preset browser where you can choose your sounds and effects.

The software works smoothly and great.

The stability of the software isn't questionable , very powerful tool by reFX.

I'm getting high performances while using Nexus in a lot of compositions , based on electronic elements and on real instruments , like piano , strings , guitars , etc.

Also in the newer version you get different eq effects like lowpass, highpass, bandpass, bandpass2, notch, peak, lowShelf, highShelf,Q factor for each band which make the music editing process faster.

What I like most about it , is how quick the program responds , very useful rompler that delivers different sounds , some more complex combined with strings and pianos, guitar and strings , etc.

I also like the design , which doesn't have a lot of it going on , very easy to follow , a browser preset that guides your trough the process.

Nexus has a 32-step arpeggiator with note-transposition, a 32-step trance gate, reverb that comes from Arts Acoustic , the library consists from 880 sounds , sample based.

My opinion about value for the price is great , pretty cheap product that competes with top software out there and in some aspects , is better.

Precision and quality of the sound is amazing , brilliant pianos , broken pianos , guitar strums , strings , a lot of amazing sounds.

reFX Nexus 2
5
There weren't any kind of compatibility issues , the program works very good on any platform available.
The book provided with the program was quite good, well detailed , all the information that was relevant to the product itself was well explained there.

General configuration and setup is straight forward , fast and easy to follow along.

The software works very good and its stability is pro and quality of the sounds is beyond decent.

The functions and the performances are very nice , its great having a great rampler that consists from a lot of sounds , tweaks , options , effects and other great options.

I've been using this product for about 3 months , but I've used quite a lot in many songs.

What I like most about it is the multitude of the sounds provided with it , you can easily combine a couple of layers and work only with this rampler and your song would sound fully , pro and complete.
I really like the new expansions which sound more current , the brass selection , the choir is also a very powerful tool from nexus , there are certain bells which also sound very good in a mix.
I like also the build-in arp which can change the way a certain sound is heard.

There is also a great mix of concert pianos , broken piano and slow strings , which in combination sound very very pro.

My opinion about the value of price is good , this product embraces a lot of sounds , options , tweaking and options , which take this product to a whole new level , so its worth the money.

Precision and quality of the sound is very good , however the old expansions sound a little out of "tune" , meaning that they are old and the sound library evolved so keep that in mind.

Did you find this review helpful?yesno
»
Read the 14 user reviews on the reFX Nexus 2 »

Published on 11/18/13
ReFX launched Hollywood 2, an updated version of its orchestral expansion sample pack for Nexus 2, available in bundle or 4 separate libraries.

Other reFX other Virtual Synths