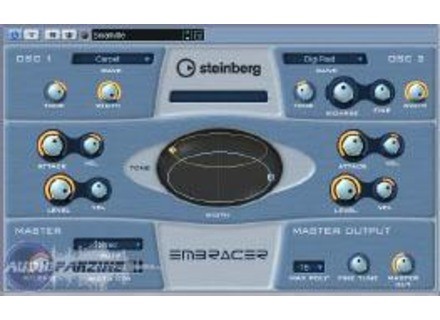 Embracer, Other Virtual Synth from Steinberg.

Steinberg Embracer
3
Steinberg's Embracer is a virtual synthesizer designed for use in their DAWs like Cubase. I've only used the software in Cubase SX 2.0 for the most part, and a bit with SX 3. It has been a while since I used this software, so I honestly can't remember the process of installation, but most likely it wasn't a problem since I can't remember it at all. The interface of Embracer is generally quite easy to follow, as even though there are a good amount of setting controls to work with, nothing is too complicated. There are two oscillators to work with, each with parameters for tone, width, and type of waveform, and the second oscillator has also includes parameters for coarse and fine for some serious fine tuning of your sound. Each then has parameters for attack and velocity and level and velocity. There is also a nifty graph in the center of the software that measures tone and width. Lastly, there are sections for master and master output, which control your overall sounds. I've never needed to look at the manual for this, so I don't know anything about it's configuration.

I'm no longer running the Steinberg Embracer virtual instrument since I no longer run Cubase, but when I did I ran it in Cubase SX 2.0 on a Hewlett Packard dv8000 lap top computer with a MOTU 896 HD audio interface. The computer had a 3.0 Ghz processor and 2 GB of RAM. I can't say that I remember ever having a problem running Embracer within this configuration, although I definitely never had a need to run more than one instance at a time. It's hard to determine how well a certain piece of software will run within a certain configuration without actually trying it, but I don't believe that Steinberg's Embracer is the type of software that will take up too much of your processing power.

Overall, Steinberg Embracer is a decent virtual instrument at best. The sounds are mostly strange and and atmospheric, but there is indeed a lot of room to play around. While versatile, I just wasn't impressed with the overall tone quality of this virtual instrument. It is definitely worth noting that this is a rather old piece of software and could be considered outdated at this point. I no longer use this in any capacity since it isn't compatible with Pro Tools, and even if it was I probably still wouldn't use it. If you're running Cubase or another Steinberg manufactured sequencer, I'd recommend checking it out as there are a few cool things that you can do with it, but overall this is definitley at the bottom of the list when it comes to virtual instruments in my opinion.
Did you find this review helpful?yesno
»