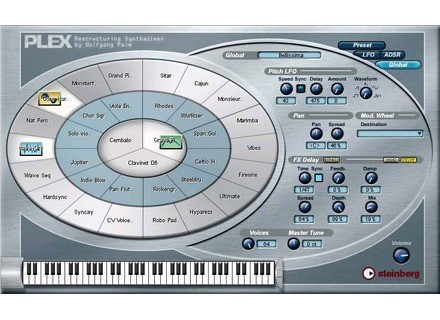 Plex, Other Virtual Synth from Steinberg.

Steinberg Plex
4
I have been using Steinberg Plex for a little over a year, it is 100 percent free and best of all it comes with over 300 presets! Plex gets very good reviews from users all over the World which is why I gave it a shot and I have been using it every since. There is no manual for this VST, you wont need one. But the Steinberg Plex is set up a bit different than almost any other VST that I have used. It was very strange at first with the layout of it, but after a hour or so you will get the swing of it and be good to go. After you understand how it works and where everything is, you will see how easily you can access your parameters.

Plex is very stable and has not crashed on my and probably every wont. I have used several VST’s over the years from Steinberg and all of them are very stable and will work on almost any sort of computer you run it on. I ran Plex on desktop PC with 8GB RAM and 2TB Hard Drive and it worked great, I don’t think I have it on any of my other computers though.

Plex comes with 300 plus presets, to me that was better than the fact that it was free. I have not heard of my VST’s coming with that many presets and can still keep the “free” tag on it. I am very happy that I downloaded it, and thankful that I read all of the great reviews on it. I would like to see them come out with a new version of it though with some more interesting and different effects. Plex seems to be lacking with the on board effects. But the sound quality of this VST is amazing for it to be free.

Steinberg Plex
3
This VST installed as easily as any other, there were no compatability issues with FL Studio at the time and it still runs perfectly to this day. The GUI of the vst is a very strange one from the usual, as it allows you to model your own sounds based on certain crtieria that you click on in the middle bubble. There are nice presets too that you can play with to get your own sound, but lots of them are pretty unusable in a mix or sound pathetically flat. Sound modellers would have some joy from this though as they have experience in the field.

This VST works brilliantly in FL and doesnt cause any lag whatsoever. I have used this for many months now and it has never been the source of a crash. In conjunction with other VST's it works and doesn't really strain the CPU at all like others do. It is a light synth that will work with pretty much any setup capable of running a DAW.

This VST is very strange as it doesn't follow the usual model of VST's, and allows more creativity when picking your sound. The actual sounds themselves are nowhere near as good as other VST's that I have used but it is nice enough to get away with. I wouldn't say that it is value for price as I am a so called "preset producer" who only really likes to work with preset sounds. I personally wouldn't buy this VST for myself if I had previously used it, but I would still reccomend it to anybody who likes to play with their sounds and develop their own sounds. Lots of the preset combinations make little sense at all. However, there is a problem as the sound sources don't really blend together as one and require extensive filtering and EQ'ing to get anything half decent.
Did you find this review helpful?yesno
»

See all 9 photos of Steinberg Plex »