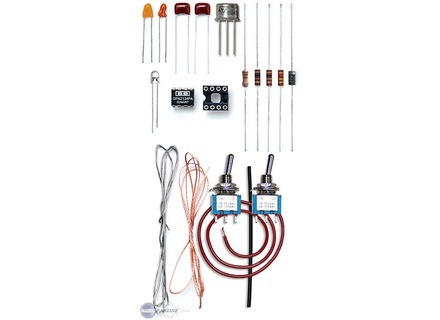 Boss SD-1 SUPER OverDrive - GT - Modded by Monte Allums
4
Some guitarists out there are pretty handy with a soldering iron. I happen to be one of them, and I really like the mods that Monte Allums does. He basically caters towards those DIY kind of guys who like to mess with electronics and whatever else we can get our hands on. This is his most versatile and, quite frankly, ridiculous mod that he does to the SD-1. It has various switches for selecting between a different presence setting and different diodes. Very well put together kit.

The kit's utilization is pretty amazing if you think about it. You can't really fit more than two switches in these Boss pedals, and he managed to choose mods that should suit this pedal the most. What I mean by that is that he chose to select between things that matter rather than some useless resistor switches that some people do. I should note that you should not attempt to do this mod if you're not handy with a soldering iron. It's extremely tight in there once you start drilling for the switches. The board itself is fairly sturdy, so as long as your iron is decent, you shouldn't have any issues with lifting solder pads, but it's still a good idea to have modded a few pedals before attempting this particular mod.

The sound is great, and this happens to be one of my favorite mods out there for SD1 pedals. I personally like very transparent boosts, and this delivers exactly what I'm looking for: clean, powerful and organic tone without a bunch of annoying diodes getting in the way of my boosting tone. The idea of utilizing a 2N3440 transistor is pretty sick, and I commend Monte for putting together a mod like this. It's also nice that you can select between symmetrical and asymmetrical boosting as it makes this pedal way more versatile than before.

This is my favorite mod for the SD-1, but you MUST be handy with a soldering iron. I would even recommend a drill press for these as it can be a bit tricky drilling exactly where you need to drill for these switches. It's not for the beginner, but if you have some experience modding pedals, you can do this mod. If you're not confident, Monte does have a modding service where he'll mod your pedal for a fee.
Did you find this review helpful?yesno
»