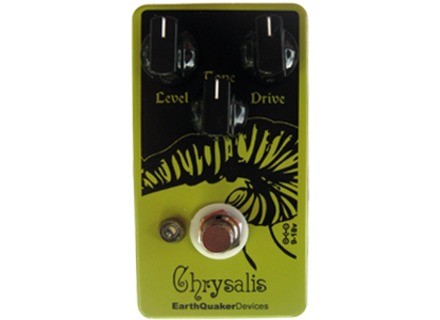 All user reviews for the EarthQuaker Devices Chrysalis

EarthQuaker Devices Chrysalis
5
The Earthquaker Devices Chrysalis is a little different than most overdrive pedals. Instead of trying to sound exactly like vintage amps the Earthquaker Chrysalis emulates the sound of these amps on records. When you think back to your favorite tones most you are thinking of album tones that you have heard on the radio for years and years. The Chrysalis emulates these tones. The cool green color and funky font on the pedal lets you know that this thing has the 70s in mind. The pedal has your basic overdrive pedal layout. It has 3 knobs and a on and off switch. It has a level knob a tone knob and a drive knob. One thing that makes the layout of the pedal different is the indicator LED is by the on and off switch. The pedal can be powered by either a 9 volt adapter or an 18 volt adapter. It can also be run by a 9 volt battery. They say the 18 volt adapter gives more headroom and better tone but I do not really notice it.

The pedal has the same general layout as most overdrive pedals with the 3 knobs on the face. The knobs on this one are a little close together it seems but I can still adjust them fine. With the LED indicator light down by the on off switch I tend to cover it up when I go to switch on the pedal with my foot. I would prefer the light to be at the top of the pedal. With the light under your foot you dont know if the pedal is on or not until you lift your foot up. This isnt a problem when the LED light is on the top of the pedal. The pedal is true bypass which means it will not color your tone when you dont want it to. I would expect nothing less from a pedal at this price.

Through a clean amp when you switch this pedal on it is a flood of classic album tones. The pedal always keeps its clarity. Even when playing a fat Les Paul the sound is great with a good amount of bite. With the gain cranked you get a nice hot classic rock tone. At every setting the pedal has a ton of responsiveness and clarity. The pedal is essentially about midrange and presence, and even with the Tone knob all the way down, the signal remained lively and defined without sounding either flabby or muffled. This impressive midrange performance is essentially where the Chrysalis lives up to its billing as all your favorite 70s album tones in a single pedal. The pedal would be perfect if it wasnt so noisy. I guess this is a part of the 70s sound that they could have done with not copying. You may need to use a noise gate if you are using this pedal.

This pedal sounds like a fully produced 70s album guitar tone. It is pretty amazing that a single pedal can sound like everything you hear on the classic rock station on your radio. Its clarity and responsiveness mean that your sound will never get lost in the mix and you will always sound great. Make sure you use a noise gate though because this pedal will start misbehaving at loud volumes.
Did you find this review helpful?yesno

EarthQuaker Devices Chrysalis
5
The EarthQuaker Devices Chrysalis is a super high quality overdrive pedal for use with electric guitar. Like all pedals, you could use this with any electronic instrument if you wanted to, but it's definitely best suited as a pedal for electric guitar. The pedal is modeled to be a sort of vintage 70's overdrive, and they definitely did a good job of nailing this kind of sound. The pedal is made up of analog components and has 1/4" connections for input and output and the ability to power it with any supply ranging from 9 - 18 volt (the higher the volts, the more headroom). It isn't a rackable piece of gear as it's a stomp box.

The configuration of the EarthQuaker Devices Chrysalis pedal couldn't be much simpler. It follows that same basic make up for a distortion/overdrive pedal that you'll find on most pedals of this kind. The three parameters that it has are for level, tone, and drive. A manual definitely isn't necessary for this pedal...

The tone of the EarthQuaker Devices Chrysalis makes it one of the most transparent sounding overdrives that I've ever used. The signal is overall one of the cleanest I've heard in terms of having no noise and being able to hear everything being played even though it's distorted. Too many overdrive pedals out there distort the sound to the point where you can't even make out what's being played. Think of the exact opposite of this and that's what you've got with Chrysalis. In my opinion it's best for subtle to a medium amount of overdrive, but it sounds great cranked as well. You may find some pedals out there to be comparable in terms of quality, but not many will be better...

If you are looking for a boutiquey sort of overdrive pedal for your guitar rig, the EarthQuaker Devices Chrysalis is just that. It's not nearly as expensive as you might think it is, and it pretty much sounds like you're using an amp's overdrive. If you don't know about Earthquaker Devices yet, definitely do yourself a favor and check out the Chrysalis overdrive pedal.
Did you find this review helpful?yesno
Cookies help us improve performance, enhance user experience and deliver our services. By using our services, you agree to our use of cookies. Find out more.