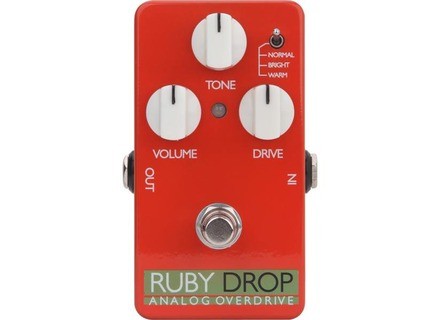 Ruby Drop, Overdrive pedal from Elypse Guitars in the 716 series.

Getting started is fast with these three knobs, the manual that limit the description of the product range

Marshall amp used on jtm30 (all-tube), Stratocaster MIM 1999 in clean sound (switch off), complies with the sound of the amp, for it is latched against the light blues overdrive guy with very pronounced grain (lack good character but at this price you can expect more ..... I will come back ....).

I used it a few times and quickly forgotten because I wanted a more distinctive sound (smooth and crunchy grain), a little disappointed in this choice by quality components against poor quality: the first uses dice screw trap for the stack has become unusable, the selector functions warm, crunch is disconnected, a knob was loose. Finally I found that for a pedal that is supposed to suffer repeated attacks over time, it does not do it at all. I will not make that choice even at that price.

fuzzstone's review (This content has been automatically translated from French)" TS9 low cost?"

Elypse Guitars Ruby Drop
4
Analog Overdrive distributed by Milonga, in fact Biyang Mad Driver OD10 rebadge, neither more nor less.
The box has lost the pretty screen a little rock'n'roll to Mad driver and green reminiscent of the ancestor Ibanez but remains Alu, the red color is applied, the design is less charming, but c ' is not really the most important when buying a pedal right?
compartment to insert the 9V battery is supplied with a convenient single knob to unscrew the connector is rigid, not flexible like the Vox Wha example.
Briefly, the external appearance seriously, and at this price, it was not a foregone conclusion.
Oh, and then there is the argument that titillates Massu old blues rockeux like me, the presence of the JRC 4558 chip!
the venerated since the Ibanez TS Green, from the first Lp's SRV short, the holy grail of overdrive (well, that's what we are selling for 30 years).
and it is clear that a certain analogy between Ruby and drop his illustrious inspiration.

good, it is quite simple to use, no manual comes with just a flyer describing the 6 series models.
for the rest, one volume, one tone, one drive (obviously it reminds you something ...) and little more, a switch normal / bright / warm modulation allows some basic sound.
be noted that the green LED that lights when the pedal is engaged is a real spot for discerning the satellite!
Biyang called this super bright LED .... this is not true!
controls respond rather well, although I think the last third of the race does not drive much more in terms of gain. but ultimately it is little given the qualities of this small pedal.

And this is where we are really surprised ...
because until now, when you buy this pedal, we say it is well built, ok, but still not be reversible ... an OD pedal under 40 € there's no because it sounds better than the Berhinger ...
And yet it sounds good this ruby ​​drop and even really well.
We found exactly the grain you are looking when buying a TS9. an overdrive warm, bluesy well, this is actually more a pedal "is the way ..." a true clone of the TS.
The sound of the TS is more rounded, more defined as well, but we must recognize that the grain is still very similar.
Special mention to the SG junior with whom she intends perfectly. P90 and TS are like always mix ...

I bought it mainly to avoid lugging when I scratch my old pals with some 300 EU begins to have some low levels of switches.
and then I was looking for one that can fit in this box Fligh the SG or Lp, who was not afraid of being splashed by a beer that falls or other "unforeseen" evening.
without giving a certain grain without compromising sound and my right arm.
and frankly, for less than 40 € it does really well.
who would want a silkscreen more fun, buy the Biyang 10 euros more expensive, others go to their local supermarket music where they can even try to get an idea.

Danzicolo's review (This content has been automatically translated from French)" Not better (than (D) surprising). As the title"

^ Effective
I use it with an Ibanez SA actuelement (pass around his level), and a vox hybrid.
I also faudrais the test grats on other, more typical blues

I use it for a few months.
J'aime bcp sound
value for money is phenomenal compared to the price of bcp pedals today.
here has never been given, but bcp abuse in my opinion.
Non

the choice would be remade without ésiter, but trying the pedal.
Because I tried it before, and the seller was looking for another because of noise with the first.
Changed jack etc ... nothing fesait
I therefore award the second nickel pr is now (about 6 months).
Perceived quality as well as its level, and physically: very good.
Did you find this review helpful?yesno
»

Loopses's review (This content has been automatically translated from French)" Hot!!"

Elypse Guitars Ruby Drop
5
Versatile analogue overdrive pedals (TRS) for blues, rock and pop.
No sounds ditables
MODEL format pedals, lgre, attention to the indicator light on the pedals It is at the risk of the light fawn Pink Floyd Show.
Battery powered or mains.
Everything is in analogy and this means, warm and versatile in the crunch.
Attention is called an overdrive, so a friend of Death metalheads Hard body, this is not for you. However, the rate can be consquent overdrive. Using the famous JRC4558 component found on large overdrive pedals worthy of the name as the Tube SECAM, first generation.
I give it 10/10 because the specifications are really respect on paper.

Good to be less in line with homo habilis, and the same I think it is still his door, it's easy.
3 CONTL classic volume, Tone drive
and for those who have made studies of shoot:
A switch which will act on the "grain": Normal, Bright, Warm
No manual, but frankly it is necessary?
One branch, we tune the knobs, play, in short: Rock and Roll!
CHARACTERISTICS respect for the guitar and amp used. No breath and True Bypass. MUSIC!
Perfect, new 10/10

The quality of crunches and saturation is relement the appointment. Ttc for 39 I dare say what concurrency of pedals Chres 20 40 times and I do not even so-called "boutique pedals." L not need to leave a kidney, an eye, an arm to have a real sound worthy of the greatest.
Sincrement I stayed on the "ass" and since yesterday I tested I still can not. They are strong the Chinese.
Grain, saturation, and the overdrive is great music.
Boin ba DSOL but I put the EnCorr .................. 10/10

I was looking for a good overdrive and I found it. The strongest is that I bought on the site of Milonga (which is the sponsor of the product) with a priori wrong on the sign, their products, as well as security on the price. At 39 I say that as a poker "I play to see." I buy it without even having heard these?? And the Ralite Exceeds setting is the quatrime dimension. To be honest, I reu yesterday and I recommend a new ds tonight to tender my sounds, thanks to the switch that has an impact on his tural g nral. DSOL for the lack of objectively as I put the 10/10.
I did test on my Les Paul, this evening will be the turn of Strato and tomorrow the Gretsch.
it will please "and surprise many. pt'tre I'm gonna order a dozen for me to play it, Billy Gibbons with Expandora ...............
A great product

Did you find this review helpful?yesno
»
Read the 5 user reviews on the Elypse Guitars Ruby Drop »