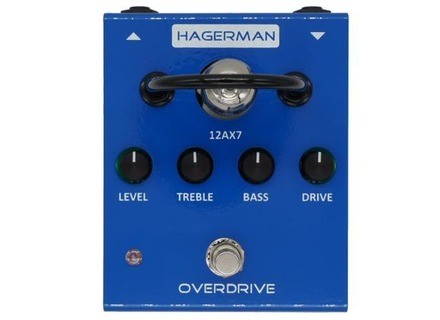 All user reviews for the Hagerman Amplification Overdrive

7 photos
The term ‘organic’ may be overused in the music industry, and perhaps a bit of a peculiar nomenclature to describe circuits and electronics, but its applicable nonetheless when comparing sounds that tend to be full-bodied and rich, as opposed to those sounding more sterile or flat. It also suggests that the sound has a more ‘natural’ robustness, or what we have come to expect from tube amplifiers and analog equipment – which solid state and digital technologies strive to achieve.

The Hagerman Overdrive is such an ‘organic’ piece of gear and it deserves far more recognition than it has received. Interestingly, the designer, Jim Hagerman, is not a guitar player, but has been designing analog circuits for nearly 40 years, based on what he likes and what sounds good in a guitar tone. The end result is the Hagerman Tube Overdrive, which consists of a 12AX7 and guts that cannot be found anywhere else – since Jim designed the overdrive from scratch and not based on other circuits or popular overdrives.

When first using this overdrive, it becomes apparent that it is unique in sound and how it ‘stimulates’ an amplifier with an enhanced warm, lush and flourishing tone. I’ve used and reviewed other overdrives that have higher gain and tend to be a cross between drive and distortion, and some do have very natural amp-like qualities, as though the amp itself is hot-rodded. The Hagerman Overdrive adds enough heat and crunch to transform a clean amp into a classic rock machine, but definitely engineered to turn a high-gain amp into a beast that sounds professionally modded. Moreover, and as important, it truly does sound amp-like, thanks to the 12AX7 tube and Jim’s genius – and it is very, very quiet.

The Drive control/amount can be so low that it is nothing more than a fantastic clean boost, and once approaching 10-o’clock the tone enters crunch territory. When fully cranked there is a good amount of fat preamp-style overdrive, but nothing that screams, which means this is a low-to-moderate gain pedal. Moreover, up full and the drive remains incredibly clear and defined without muddiness or muffling in tone. There’s also plenty of headroom with that gain, thanks to an advanced boost converter that generates high voltage. (On that note, be aware that the pedal comes with its own 9VDC 450mA power supply that has a POSITIVE center – most pedalboard power supplies have negative center pins). What I also noticed is that the EQ controls’ range are not excessive– both Bass and Treble give a very decent amount of cut or boost that remains highly useful in a guitar’s frequency range, thus making it easy to dial in for just the right sound.

I suspect the Hagerman Overdrive is not as popular as it should be due to its overall design, being more affluent in (and created originally for) studios, as opposed to going on tour and fitting (height-wise) in pedalboard cases with low top profiles. However, for those playing small gigs and lugging an open pedalboard, it shouldn’t be an issue. And, with so many guitarists being content with in-home studio playing and recording, the Hagerman Overdrive is the cat’s meow.

Each powder-coated Hagerman Overdrive is hand-built in the USA (direct from Hawaii). At $229 the price is rather reasonable considering many other high-end overdrives are comparably valued; and the Hagerman’s sound is unique and of the highest quality components, including metal film resistors, high-temperature electrolytics, polypropylene capacitors and a custom designed folded-aluminum chassis. If that isn’t enough, the Hagerman Overdrive comes with a 10-year warranty, which is unusual in an industry of 1 to 3-year warranties. If you’re looking for that real-tube result that enhances the natural sound of your amplifier, the Hagerman Overdrive needs to be a consideration as it is a serious contender.