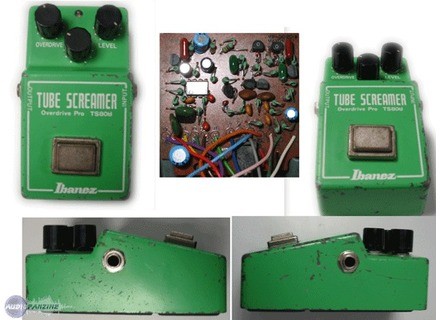 Ibanez TS808 Tube Screamer Vintage
5
Back in the eighties I walked into my local music store, and in the display case was a used green pedal. An Ibanez TS-808 Tubescreamer for sale for only $10. I had the money in my pocket, and having an unhealthy love of gear I bought the pedal. I did not realize what I had just bought. For years I did not realize the Holy Grail that I had found. I kept it because it had such a unique sound, and I had written a guitar part for a song that used “that” sound. Years later I made the mistake of selling it to a friend. He sold it back to me, which was very gracious of him.

What is it about this pedal that makes it so sought after? Why is it such a legendary piece of gear? You can point to Stevie Ray Vaughn’s use of it as reason, but I think there is more to it. It comes down to the reason I could never give it up- the sound. It’s unique. It’s awesome.

I bought the pedal, and retained it for years not because of the buzz surrounding it. I kept it because it sounded so good. It is simple with only volume, tone, and drive controls. A simple on/off button (that is square). It is excellent as a base sound, a pedal you leave on and never turn-off. I used it as my dirty but not distorted tone. Then I layer my distortion pedal with it for a distinctive and biting tone. It is perfect for rock, but can be rolled back for mellower styles and genres.

I had to have a single repair in all the years I’ve owned it. The power supply jack had a problem that my local music store fixed up for me. The guy behind the counter said I needed a time-machine, not a repair. I am tempted to buy a modern version of the pedal, and to retire this old friend into a shadow box on the wall. Someday I might. It comes down to the old adage, “don’t fix it if it ain’t broke.”

In all honesty I have never done a head-to-head comparison with the newer versions of the pedal made by Ibanez. The version that Line 6 has available on their gear sounds really close, and was one of my favorite “pedals” that I used in my chain. Although, typical of digital reproductions it lacked the analog warmth of the real thing. The Voodoo Lab Sparkle Drive and Sparkle Drive Mod both capture the sound very well, but lack the mojo of the TS-808. The Sparkle Drive Mod sounds very neat and tidy compared to the TS-808, which has a more feral sound to it.

As guitarists we do have a tendency to not like change. I believe a part of that is that we fall in love with the original pieces of gear that we buy. No chorus has sounded as good as my cheap Arion CH-1, analog delays sound best to my ear, and no overdrive pedal has ever completely captured the sound of my TS-808.
Did you find this review helpful?yesno
»

Ibanez TS808 Tube Screamer Vintage
5
This is the original Tube Screamer, not a reissue. While the reissues are not much to sneeze at, this is what made the Tube Screamer a legend. The pedal is an analog overdrive that can sometimes border on a light distortion. There is a 1/4" input and output, as well as the power supply input. There are no midi/computer editing capabilities, and there is no way to rack this pedal.

This is a pretty basic pedal, as most analog pedals are. There are three knobs for Drive, Tone, and Level, which are pretty self-explanatory for the most part. The manual is pretty much unnecessary, and good luck finding one nowadays.

I tend to use this with a multitude of guitars, it works well with humbuckers and single-coils. This is a high-quality pedal, there's really no other way to describe it other than a solid, fat overdrive that can be cooked up to a distortion. It's absolutely great for SRV relatively light overdrives to Bad Company style distortion. It's certainly a rhythmic monster, but with the right compression and boosts (or simple volume adjustments), it's also a handy lead pedal. Leads will only work over light accompaniment, heavy stuff will need more power.

This is a high quality pedal, this thing really kills it. If you can find one at a remotely affordable price. There's only about a 15% difference between this pedal and some of the others, but for most, that's a crucial difference. I think that I'd recommend this to anyone who isn't a devout metalhead, cause it wouldn't do much good in that respect.
Did you find this review helpful?yesno
»

Ibanez TS808 Tube Screamer Vintage
5
The Ibanez TS-808 Vintage Tube Screamer overdrive pedal is an analog effect. It has a 1/4 inch input and output and is not a rackable unit as it is a stomp box.

The setup and configuration of the TS-808 is quite easy. It has three knobs - one for overdrive level, one for level, and one for tone. It is easy to get a good sound from this, as it is easy to figure out how each of the three knobs is going to effect your sound. I don't have a manual for this so I can't speak to how helpful it is.

The Ibanez TS-808 Tube Screamer has become known for a certain type of overdrive. It isn't too heavy - it is more fat and crunchy. While that is the general sound it has, you can get a wide variety of different overdrive tones to it, depending on how you set it. While I have only used this with guitar, it would probably work fine on anything you wanted to use overdrive with. This pedal especially sounds great with Fender gear - specifically with a '76 Fender Twin Reverb and a Fender Stratocaster. This combo has proved to be an unbeatable tone in terms of playing rock music with overdrive.

I've been using the Ibanez TS-808 for about four or five years and I have found it to be a great overdrive pedal, although it isn't the most versatile overdrive pedal I have used. If you can find an original TS-808 it is going to cost you a bit, but really has a classic tone that some guitar players have grown to love and cannot live without. While the reissues come close to this, nothing can match a true vintage Tube Screamer. This pedal has become a well known classic and is a pedal that every guitar should try out.
Did you find this review helpful?yesno
»

very very good overdrive, which goes very well, which adds more which is not negligable, even used only c is pure bliss ..... hours of blues .... and what its
Note 9

the grain that I was missing in my pedalboard, a fluke in a near state of new, very little pedal that served al former owner, so in a state impecable memere for over 30 years. I put 9 everywhere for it is very EXCELLENT
Did you find this review helpful?yesno
»
Read the 6 user reviews on the Ibanez TS808 Tube Screamer Vintage »