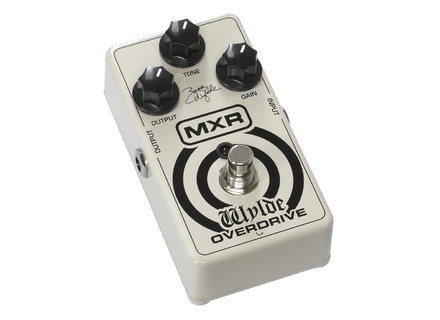 MXR ZW44 Wylde Overdrive
3
The MXR Zakk Wylde overdrive came as most boost pedals do with output, tone and gain controls. Nothing fancy except for the paint job and lets face it, as a fan that's all that matters, or so I thought. Basic input and output controls and power adapter. Built well as most MXR stuff usually is. Characteristics get a 7 rating based almost solely on looks.

It doesn't get much easier to use than this and a boost should not be a complicated piece of equipment. 3 dials and they all perform their function, although lack a great range in all cases. Manual is perfectly fine, no complaints.

Ok here is the meat of the review, this overdrive was a huge let down and I'm surprised Zakk let his name be placed on this. I can't express enough how muddy and dark this thing sounds. It really lacks range in the controls and doesn't do much to boost the signal, just makes it muddy and grainy. Listening to Zakk live, that is the exact opposite of his true tone. He is balls out boosted Marshall without grainy, muddy, messy noise. In other words, his tone is the exact opposite of what his signature pedal does. I tried to like this for a long time and could not find anything appealing about this other than the paint job.

Overall there are much better choices out there for a true boost and even a boost with some gain. The Fulltone OCD and basic Ibanez TS-9 come to mind as better choices right off the bat. I can't stress how truley dissapointing this was. The tone of my amp was muddied up and could not be dialed in with even the three basic controls. Definately not worth the money, and this is coming from a fan who loves signature gear and knows you pay mostly for the name. In this case, I'll pass! Built well and looks good but that's about it. I also hate having to carry a screw driver around to change the batteries. Bottome line, there are much better choices out there.
Did you find this review helpful?yesno
»

My favorite application has been a Les Paul into the pedal into a Marshall style amp. I love Zakk, so I often use settings similar to what i found he uses: just a sliver of gain, tone at 11 oclock, volume at 2 o’clock (I think Zakk may max the volume out)
In my earlier years, i didn't quite understand this way of working with pedals. I thought the pedal gain should be aggressive, making you set the amp cleaner. Now I realize many people just use overdrive to add a touch (or zero) gain to an already gained out amp. the result is a significant increase in reactiveness- notes just jump off the fretboard. Harmonics fly...especially the lower string pinched ones. This is crucial if you're going for the Zakk Wylde sound, get a boost, use thicker strings, and get an LP (or copy) and you're in business. Also note: it helps if your hand is relaxed to make the pinches fly: too much effort makes a stiffer hand makes the harmonics choke out. This pedal is a key ingredient to all of the above. I love the edge it brings to the guitar tone.

The best thing about this pedal is the edge and aggression. The least is the added noise...I didn't think it was too bad, and it is billed as "true bypass". But after trying a few other pedals out, I realize this pedal does add a bit too much noise and the tone suckage when off is there. Oh well, I love playing Wylde type riffs, and this pedal gives that in spades, so it's an acceptable trade off. I've recently tried a tube screamer and a BB overdrive...to me they are all different shades of accomplishing a similar task. if you want the pedal to deliver the majority of the gain, look elsewhere...but if you need a pedal that delivers an edgier clean boost, this should be tried out. I probably would look towards a BB or Tube screamer for most applications, but if you love Zakk than this pedal is for you. Unfortunately, my toggle has grown to be inconsitant (after years of hard playing) so now it sits in a box and has been replaced by my BB+. Great pedal, just know its shortcomings and strengths as outlined above. Rock on <squeal>!
Did you find this review helpful?yesno
»

MXR ZW44 Wylde Overdrive
3
Zakk Wylde has always been known for having some sort of boost in his arsenal. For decades, he used the old school Boss SD-1 to boost his Marshall JCM800s loaded with 6550 tubes. However, since he's gone on his little binge of signature gear, he decided to get his own signature boost pedal. In reality, this is pretty much the same as the standard Boss SD-1, but it might be a tad thicker in tone. It's close enough to where either one works if you're looking to get his tone.

The housing on this is fairly sturdy, but I've heard of a few switches failing on these. I never personally experienced that, however, so take that with a grain of salt. The housing seems like it would be able to withstand heavy touring. The graphics on this are kinda dumb with the whole bullseye theme, but that's what he likes, so I can't criticize it too much. The knobs are easy enough to get at, and if you've ever used an SD-1, or any boost, you'll know exactly how this thing works.

The pedal sounds like a slightly thicker SD-1, but the difference isn't too huge. You'll hear people on the internet arguing about this pedal all the time. If you have an SD-1, you'll pretty much know how this will sound once you start boosting your amp with it. I like to run the gain low with the level cranked and the tone at roughly noon. That delivers a solid tone if you already have a gainy amp. If you have a lower gain amp, such as the JCM800, you'll probably want to add more gain and a little less level to help even everything out.

The pedal is solid, but SD-1s are so cheap that I just recommend getting one of those instead. I see SD-1s going for like $25, which is awesome. The only real reason to get this pedal is if you absolutely need all of Zakk's gear. You can easily mod the SD-1 to sound like this pedal with a few parts, so I'm not sure how much this pedal is worth getting, but it's solid on its own.
Did you find this review helpful?yesno
»

This is a pretty high gain overdrive box by MXR. Modeled, I believe after the original boss sd-1 with tweaks that Zakk wanted himself.

Very easy to use, only two ways to do so. First as a clean boost, meaning the amp's signal is clean, and you boost it with this and it adds so much dirt. SO much that it'll turn your clean tube amp into a classic rock distortion. Very cool. Very high gain. Doesn't sound that great, it's a bit shrill at times this way.

Second, the way it was primarily designed for, a dirty boost. Have an amp set at a semi dirty sound, kick this in and get ready to get smashed in the face!!!

As a clean boost it's not so great, it'll get you some thin lizzy-type tones which is cool.

As a dirty boost, the way it was meant to be it excels and kicks your amp in the nuts!

Thick, monstrous raunchy tone!! And I'm being literal. It's a huge sound and it sounds so great! No it doesn't sound the same as a tubescreamer, it doesn't boost the mids like a tubescreamer does, not does it sound like an sd-1 where it just boosts the highs and cuts the bass out.

The bass is brought back in with this pedal and the mids aren't over emphasized. Everything seems to come out enhanced and sends a thick, clear, harmonically rich distortion. Raunchy is the best way I could put it.

It is a VERY NOISY pedal however, I believe this is part of the design. The noise is what makes it sound so great? You'd definitely need a gate if you want to do quick stops and starts etc. I really don't know how Zakk does it, well maybe he just keeps playing through all the time. Which seems to be the case. The last time I remember hearing most of his stuff he never really does too many stops and starts etc.

It's a great pedal as a dirty boost! Super high gain sounds, very raunchy and thick!! Lots of sustain and harmonics! Not your typical TS-9 sound nor is it the weakish sounding Sd-1. It's like an sd-1 on steroids and sounds HUGE.

Great pedal if it weren't for all the noise. Be prepared with a noise gate to tame this beast to get it workin the way you want! Definitely a great metal/high gain overdrive pedal for the price I'd say!

Did you find this review helpful?yesno
»
Read the 21 user reviews on the MXR ZW44 Wylde Overdrive »